JumpStart Around the World

JumpStart Around the World is a game in the JumpStart series released in 2000. 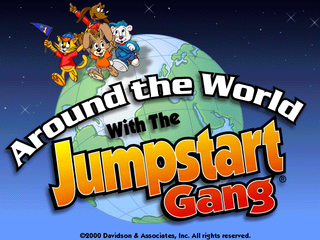 atw_sin.dcr contains an unused title screen image named "atw_ttl_bkgd". It displays an alternate title, "Around the World with the JumpStart Gang", and has a lighter background and different copyright text.

atw_start.dcr contains a variation of the game's opening theme with no sound effects. The audio track is titled "ATW Theme 8/22 **** Take this sound out", indicating its intended removal. It goes unused in favor of a video that contains the same song with sound effects to match the onscreen animations.