JumpStart Reading for Second Graders is a game in the JumpStart series released in 1998. The game follows CJ and Edison on an adventure around the globe to find clues to an ancient lost city's location before the villainous Dr. Listick does. 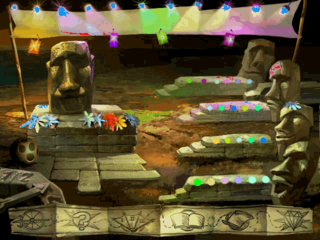 At some point, Easter Island was going to be a location included in the game, with its own minigame. An image depicting several moai, with some odd digital artifacts, is present in the file IG001.RSC. The game's SPEECH.INI file also has a section of unused code for it as well:

The SPEECH.INI contains a section of code intended for debugging.

Early releases of the game (v1.0, in specific) had it titled "JumpStart 2nd Grade Reading" as opposed to "JumpStart Reading for Second Graders". Every release after retitled it to the more familiar one; many other subject-specific JumpStart games followed suit on this change in nomenclature.

Even later releases of the game updated the logo used in the game's title screen, which curiously shortened the title to simply 'JumpStart Reading'.