The file SB001.RSC, which contains assets for the Scrapbook section of the game, contains another photo of staff, subtitled "Jump*Start Kindergarten Team". 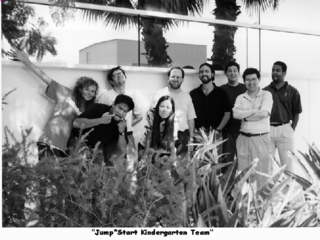 KG001.RSC contains an unused variation of the school exterior background. The tree furthest to the right received some tweaks to its shading/texture. The bell and one of the yellow flowers were also removed since these were changed to sprites that could be animated over top of the background in the final release.

The file LH001.BAL contains several voice clips that were used for CJ and Edison in JumpStart 2nd Grade. This file was not present in the original release, but is present in updated releases from around 2000.

The French auto play screen uses completely different artwork for the characters and logo from the US version.

The French release has a completely different title screen from the US release.

The French release made numerous changes to the Radio activity, which allows the player to listen to various songs.

The Clock activity uses some different graphics for the decorations on the clock.

The time display is also changed to use a 24 hour clock rather than a 12 hour clock.

The Bulletin Board had nearly all of its images and music changed for the French release, mainly for the purpose of omitting holidays not celebrated in France, and in some cases replacing them with French holidays.

Circa 2000, this game was re-released as JumpStart Kindergarten Deluxe. This release added a "SmartTools Toolbar" to the game, an additional feature which, by default, will always be present in the top right corner of the screen. It displays messages to the player (mostly words of encouragement) and could be used to quickly access the JumpStart website, among other things.