JumpStart Kindergarten is the first game in the JumpStart series.

A set of images that, if spliced together, would create a row of B letter blocks in front of a pink striped background. The final release uses a solid blue background for this part of the game instead of the pink striped one seen here.

A graphic presumably used for planning the positions of the items that appear in the garden. Also, the arrow which appears in the top left corner has a transparent appearance for some reason, when it's yellow in the game. 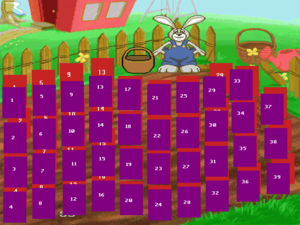 There are two .midi files that don't appear to play during any part of the game. It is unclear where they were intended to be used.

There's some unused dialogue for the bird who helps the player sign in.

A voice clip saying "sponsored by..." Seems to have been intended for the television, possibly before the letters of the alphabet appear.

A set of lines for the names of different creatures with each one followed by a sound effect. The voice that says the names appears to be a placeholder, given that it doesn't match Hopsalot's voice. This set of lines also mentions a cow and a monkey, which were replaced by a sheep and a dog in the final game, and thus the sound effects for those animals aren't used either.

There is a line for Hopsalot saying purple, which is not one the colors included.

There is dialogue for Roquefort saying the number of each level, which is never used. This also includes lines for a ninth and tenth level, even though there are only eight levels in-game.