Bubble Bobble for DOS is an adequate port of the arcade game, containing an actual soundtrack if you had a sound device, adequate controls, and fairly decent frame rates.

The game checks for a file named BETA.DAT. If it succeeds, it checks for the following lines: 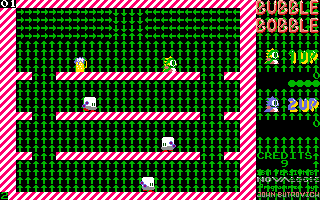 For each line, it also checks for the standard DOS newline for each new line. In the order the cheats are shown above, the following effects can happen:

It will also show an internal version number on the controls set-up screen.

While this string can be found in BUBBLE.EXE at 0x200, it's not shown in the game itself and there's no documented command prompt to show this.