A Bubble Bobble-themed puzzle game revolving around matching and popping colored bubbles. It's been ported to more consoles than you've... had... it's on a lot of platforms, let's leave it at that. 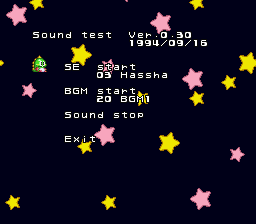 It features a date and version number which does not differ between versions of the game.

This message appears at 7F510 in the US ROM (European version: 7F53E, Japanese version: 7F460), right after the regional lockout error message.

This line appears at offset 28000 and is used to detect when the game has been reset:

This one appears at offset 2B77E: