Eight years after the first game, they're still Bubblin' and Bobblin'. 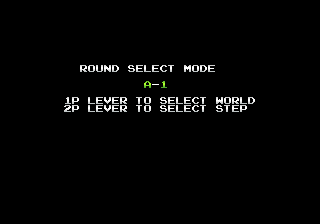 When booting the game, hold the Service Coin button until the "SERVICE SWITCH ERROR" message pops up on-screen, then press 1P Start (×3), Service Coin, 1P Start. Start the game and select a character, and the menu should appear after the intro sequence.

An odd unused shadowy enemy. Seems it would spin around, fall, and do... uh, something.

A panicked version of the spinning animation is present as well, possibly the "stunned" state of this enemy. There are also animations for being trapped inside a bubble and getting popped.

An unused boss! This is a giant version of the Dranko enemy, it was meant to be the boss of one of the five pre-final stages (O, N, M, L, K), just as giant versions of the Mighta and Monsta enemies appear as bosses there, but instead those two bosses are used 3 and 2 times respectively. A Dranko being a boss explains an ending being devoted to one hitting on the male descendants of Bub and Bob (both children, mind you). The pointing animations would be used for attacks. 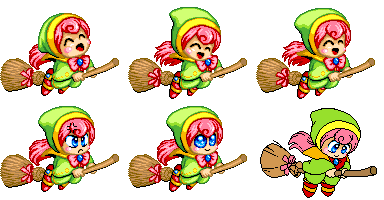 Along with the standard death animation, a range of different emotions are available for this boss. The last frame has not been finished, missing the complicated shading found on the rest of the frames. 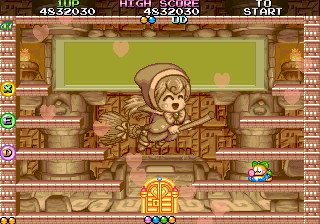 However, an altered version of one of the Super Dranko sprites did make it into the game: it's used in the background of the fifth Treasure Room you can visit during a playthrough.

Two different bottles that would have been thrown by Super Dranko.

Small and large fireballs, as well as a big star. This is basically a giant version of the Dranko enemy's attack.

These lightning bolt graphics, however, aren't similar to any attack by the Dranko enemies. This might have been spawned by the silver bottle.

An unused level icon, probably from a scrapped stage. These books are in the same styles as the ones found in the prologue.

A level icon for the area where the left door of the starting stage leads. Since there's no door that leads to that part of the first stage, there's no use for this icon. 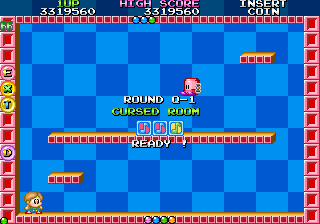 By moving up a level from the Hyper Drunk stage, the player will enter the training stage, displaying an otherwise unseen level name: "Cursed Room". Completing this level leads to Round A-2. 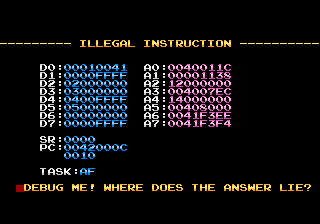 When an error occurs, a screen appears along with an encouraging message for the debugger.

An incomplete set of internal sound names can be found, fragmented, on various ROM chips.