Call of Duty: Modern Warfare sees the start of the franchise recycling game titles like they recycle game content.

The game contains names and images of unused maps. One map has a description.

Codenamed "mp_m_king_pm," King Night was a map used by Infinity Ward to showcase Modern Warfare's RTX features. Although cut from the game, the map is present in the PlayStation 4 version.

The game contains several unused perks. Some perks have names while other only have a description string remaining.

The game contains remnants of a scrapped Pro Perks system where perks could be upgraded to stronger versions, presumably through completing challenges as in other games, although the specific method is not known. Perks appear to start off at a level 1 version that can be upgraded to level 2 and then to Pro.

The game contains some unused equipment, some of which appear to have been replaced with Field Upgrades.

Teammates in core can destroy friendly Stun Grenades. A video of this can be seen here.

The Riot Shield has a certain damage threshold that when reached will not award any more EXP for further damage. This threshold is so high that it cannot be reached in a public match.

UAVs can damage helicopters that fly into them, although the specifics are not known. As can be seen in this video (2:26 - 2:39), the helicopter is slightly damaged by being hit by the front of the UAV, then upon flying into its mid body and being rammed by it, loses more than half its health and explodes. Deaths caused by this appear in the killfeed as a suicide. This cannot normally be encountered in-game as there are no situations where it could occur.

While the game suggests the Cluster Strike laser can only target areas, it is also capable of targeting the the VTOL Jet and Support Helo even though they are a different class of game entity.

The Juggernaut has some unique game mechanics that go unnoticed for different reasons.

The Juggernaut also has third person animations for turning the music on and off, but these cannot be seen as they are too subtle to normally notice. Switching the music is done via the Juggernaut's right arm flipping a switch on the side of the helmet.

Dumpsters in Ground War when fallen on completely block fall damage and only inflict a tiny amount of damage. While this feature is present in-game, there are no situations where it can normally be discovered.

The game contains an early loadscreen image of Rust. In the early image, the middle metal construction is more run down and has cables attached to it that are absent in the final.

Originally, each season would have had its own unique name before being changed to just be numbered alone.

Home Grown Terrorism was also seen in the Behind the Scenes video done by The Hollywood Reporter.

Some placeholder menu definitions remain from a planned Clan system to allow players to group together under a common name and emblem. You can access these menus via modding, but it's all placeholder text so don't expect too much. 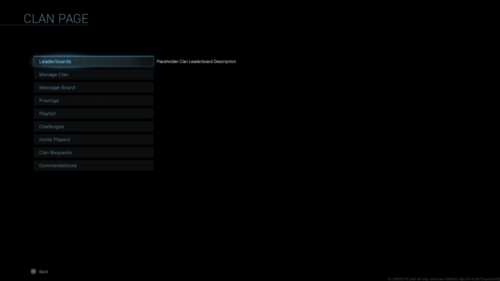 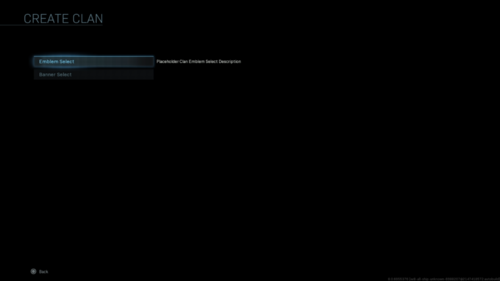 Assets remain from a planned "Supply Drop" lootbox system that had previously had its existence leaked in September 2019 by a source who had announced a number of later-confirmed details about the game, with glitches making its presence known in the public Beta. The system was ultimately replaced late in development with the Battle Pass system, likely to avoid legislative scrutiny in several countries.

The game contains a default bundle price of 30,000 COD Points that does not normally appear in-game, but can appear if there are problems loading bundle information, as seen here.

The game contains an unused image of an early UI mockup. This mockup appears to indicate that early in development the UI was going to be green colored like in Modern Warfare 3. 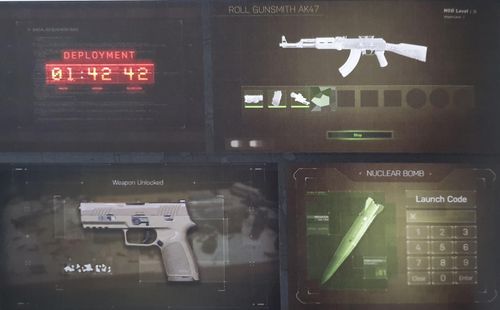 There is an unused image of the Private Match menu with a different UI layout. This UI probably originated from a Pre-Alpha build. 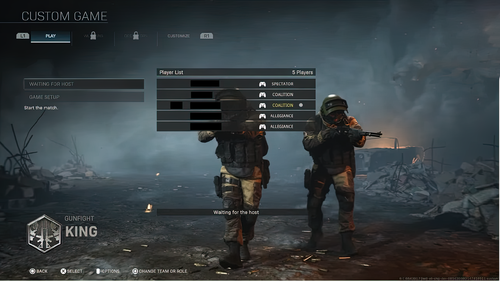 Starting at 0x2D9AF80 in ModernWarfare.exe contains a few debug logs including bit.ly links that redirect to the Rickroll video, which have been removed on here. These are also present in the Black Ops Cold War Beta and Black Ops Cold War Pre-Alpha.

Weapon filenames refer to weapons by their real-world names, but are oddly written in the form of "<first letter of name><NATO phonetic alphabet code word corresponding to second letter><numbers>". It is not apparent why.

Modern Warfare's launch update (Version 1.03) added several future season weapons into the game's files. These include but are not limited to: RAM-7 (with it's cut 9mm Para 60-round Drums Magazine), ISO (named SM_CHARLIE9), Striker 45 (named SM_SMGOLF45), Holger (named LM_MGOLF36), and the Crossbow.

This update also contained a very visually different version of the Damascus camouflage. This version of the camouflage was more of a turquoise blue and black with patterns running through it on different parts of the weapon. Additionally, its coloring matches more closely to its UI Icon, which is currently still used in the game. 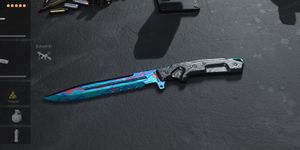 A knife with the old version of the Damascus camouflage applied

This update was released on April 8th, 2020. The game contained at this point incomplete attachment data and a description for the unreleased and unnamed Bruen Mk9 LMG, along with possibly other data. The content currently in the game had the following differences from the final release:

This update was released on May 19th, 2020. The following unreleased content was added: