Call of Duty: Black Ops is the first game in the Black Ops subseries of Call of Duty games, taking place in the '60s. TELL US WHERE THE UNUSED CONTENT IS, MASON!

Functions exactly like it did in Call of Duty: World at War. It has proper first person animations and works perfectly as a player weapon.

This version of Mustang and Sally is very bugged out and when dropped, the game crashes. This weapon also does very little damage. Found using the "give all" command in Zombies.

Like Mustang and Sally, this version of the dual wield CZ75 is very bugged out and when dropped, the game crashes. Found using the "give all" command on the mission, WMD.

While carried by Steiner in a cutscene for the mission "Project Nova", the P38 is never seen in normal gameplay. However, it does have a slightly unfinished pick up icon.

In the mission "Project Nova", in a later section of the map, you hold a Torkarev with a flashlight. With the "give all" command, you can get a Torkarev without a flashlight but this Torkarev is almost the same as Call of Duty: World at War's Torkarev but with a Makarov firing sound.

A light machine gun. Files exist for this weapon in the game's data. Oddly enough, it did appear in the DS version.

A big-ass chainsaw intended for Zombies mode. Code, player animations and some zombie functions still exist. Can only be used by shunting it over into normal multiplayer with the Mod Tools.

The Thompson is used in the Prestige or Hardened editions of the game, as well as the Rezurrection DLC. Empty files for the Thompson can be found in the regular version suggesting it was most likely planned for a zombie map.

A development fragment in almost every Call of Duty game. Pickup icon is an AK-47. 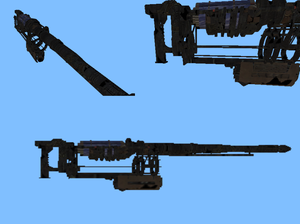 In the game's files there is an unused model of the "winter's howl". This version uses the same textures as the final version. Can be viewed via the Black Ops 1 mod tools.

In the mission, Revelations, if you use the "give all" command, you have a lot of guns. All of the guns have no sound and neither the knife you are also given. The only weapons that are used in the map by Hudson is the M1911 and surprisingly the AK-47. The AK-47 appears when the game disc is dirty/damaged.

These weapons are used, but unused coding shows that they were supposed to be used in other levels (or modes).

The M2 Flamethrower is used, but only in Dead Ops Arcade. Interestingly enough, a model as well as cut quotes from "Five" and "Kino der Toten" remain, which suggests it was to be used in those maps as well.

The Model 1887 is used, but only in "Vorkuta". However, unused coding suggests it was to appear in the missions "Payback", "Redemption", and "Rebirth". The coding string "mp_m1887" suggests that the Model 1887 was also planned to be usable in multiplayer. If you use the "give all" command in Vorkuta, you can use the weapon however, it acts like a SPAS 12.

The MP40 is used in the Campaign and a bit of Zombies, but strangely has coding to be obtained as a killstreak. The coding strings are "mp40_mp", "mp40_drop_mp" and "mp40_blinged_mp". Audio bits for the Tropas, Black Ops, OP 40, Spetznaz, and the NVA faction announcers remains. It can also be used in "Five" using console commands.

There are quotes in-game that suggest at some point the "ThunderGun" was going to appear on the zombies map "Five" before being cut. 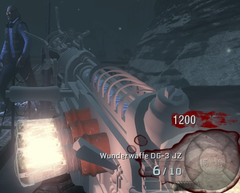 The Wunderwaffe DG-2 is used, but only in some of the original zombies maps. Cut quotes seem to suggest that it was originally available for "Kino der Toten" and "Five". It would've most likely been obtained through the Mystery Box. The sound bits for "Five" still exist along with the "Kino der Toten" quotes. An unused Pack-A-Punched variant known as the "Wunderwaffe DG-3 JZ" can be used in Call of the Dead with the help of the console command "give tesla_gun_upgraded_zm", though it has no texture.

For some reason, the AK-47 is present in Zombies mode, but normally inaccessible and only half-finished. It does very little damage, has no firing sound and cannot be Pack-A-Punched. However, the Pack-A-Punched version of the weapon, the "Red Mist" is fully present and working, adding an attached flamethrower.

Video of ak-47 in zombies. (Note: The purple blood is custom textures and NOT a part of the gun)

In addition, Pack-A-Punched versions of the Kiparis, Stoner63, Skorpion, and WA2000 exist in the game's files.

A cut Perk-a-Cola that was planned for the Zombie map "Ascension". There are 4 cut quotes mentioning this perk. According to the quotes this perk would allow the player to make an explosion. It's highly probable the perk was reworked into "PhD Flopper".

This perk is most likely another name for the previously mentioned cut Perk-a-Cola "Boom Juice". There are again 4 cut quotes for this perk, but they sound very similar to the "Boom Juice Quotes".

A cut Perk-a-Cola perk that was planned for the Zombies map "Ascension". There are 4 sound files with the name "Pronaide" (example: vox_plr_0_perk_pronaide_0_PCM.wav) in the title, but they only exist for Dempsey and Nikolai. Then there are 4 more sound files for Takeo and Richtofen, but these files have the then named "Prone" (example: vox_plr_3_perk_prone_0.wav). All of these sound files seem to mention the same perk. This perk would affect the player's jump and prone in some way according to the quotes.

A cut Perk-a-Cola perk, planned for the Zombies map "Ascension". There are 4 sound files of the characters talking about it, but Dempsey is the only one who mentions it by name.

A cut Perk-a-Cola perk, which was probably going to be similar to the "Bandolier" perk from Call of Duty 4: Modern Warfare and Call of Duty: World at War. An icon for the perk exists.

Hellhounds are seen in-game normally, but not in the map "Five". Unused sound files are the only remains of them.

A cancelled multiplayer map. Although the map itself is completely unknown, it can be fully and accurately reconstructed as seen here. The minimap data and a playable, but unpackaged map file are present in the map tools. May have been replaced with the DLC map "Hangar 18".

Originally, Berlin Wall was supposed to come with the game, but it was cut. This map was later finished with the First Strike DLC.

Discovery was also going to come with the game, but was cut. Just like Berlin Wall, it was finished in the First Strike DLC.

The map Hazard was supposed to be called "Golf Course" at some point. It was scrapped and later released in the "Annihilation" DLC.

No, not the finished "Jungle" map. This map was set in a NVA military base during a stormy night in a jungle village. It was cut late in development as a (finished) minimap, background and vote icons remain.

No, not the finished "Havana" map. A different one. Densely urban, medium sized, resembles "Favela" from Call of Duty: Modern Warfare 2. Probably scrapped at an early stage, judging by the developer textures present.

Just like the other maps that were brought back as DLC, Hotel was going to come with the game. It was finished in the Escalation DLC.

An airstrip that resembles the one from the campaign level "Operation 40". Judging by the minimap, it had a layout similar to Launch. May have been cut in favor of Launch.

The codename for Havana. Treyarch announced at the Call of Duty XP event that Black Ops was going to have a map set in Cairo.

The codename for the final game's Jungle, meaning that this map was called "Havoc" before getting renamed to "Jungle" in the final game.

A map set in the Munich Olympic Village. It was later finished as Stadium in the First Strike DLC.

A shipping port in a snowy area. A minimap image is present.

The zombies map "Five" was originally intended for multiplayer, as it was a port of the mission U.S.D.D. A minimap is what remains.

A non-snowy shipping port that is similar to the cut map "Docks" from Call of Duty: World at War. A minimap is what remains and looks very unfinished, judging by the developer textures.

A map set in a snowy mine. Strings are present.

Two maps, both being based off of the campaign level "Redemption". They were cut because the setting made many killstreaks useless (e.g. Napalm Strike).

Set on the rooftops of interconnected buildings in a tropical area. A minimap exists. Probably cut because three rooftop maps would be a bit much.

Some kind of industrial facility. A minimap image is present.

A Zombies map definition in the Escalation DLC pack. May have been replaced with "Shangri-La".

Material files for the minimap and loadscreen - but not the actual images - are present.

A loadscreen exists. According to Treyarch's mappers, this was supposed to be a remake of "Castle" from World at War.

The codename for Moon. According to Treyarch, Moon was going to be set in Paris but went against it because they wanted to "go out with a bang."

An alternate (and rather creepy) Firesale announcement.

Since you are in the cockpit, you normally never get to see the exterior. However, if you manage to noclip out of the helicopter, the back of the model is extremely low poly since it is never normally seen.

This is an early version of the loading screen "Victor Charlie". It is shorter than the final version. There is no sound.

This video is unknown what this could be used for. According to the name, it was probably gonna be used for the mission "Victor Charlie". The graphics are a bit downgraded compared to the final game’s graphics. Mason can also be seen with no restraints to keep him from getting out of the chair. There is no sound at all.

According to the name, this video was going to be used in the mission "WMD". As you can see in the video, you can see what the interrogation room was originally going to look like. Looking at the white screen at the end with some adjustment to the brightness, the Call of Duty: Black Ops logo can be seen. The interrogator appears to be Mason. There is no sound at all.

It shows a shortened version of the “Nacht Der Untoten” loading screen from Call of Duty: World at War with the text ”DEAD OPS ARCADE OUTRO PLACEHOLDER”. This was for when you defeat the Cosmic Silverback.

Like “zombietron.outro.bik”, it’s the Nacht Der Untoten loading screen from Call of Duty: World at War but at the end, the word "Nazi" is covered up by a black rectangle due to Nazi Zombies in Call of Duty: Black Ops expanding beyond just zombies of Nazi soldiers. There are possibilities for what this video could be used for. This video was probably a placeholder loading screen for any zombies maps that do not have a loading screen.

The German version cuts out several scenes of intense violence, tones down any graphic violence, and removes the Nazi symbols. German law prohibits the usage of imagery representing "unconstitutional" groups (such as the Nazi party), and games depicting graphic violence are often censored in Germany to avoid being banned from sale.