All crunch and no worktime makes for a very bad Call of Duty game, now, doesn't it?

Most of the weapons in the game used their real life counterpart name during development, these were most likely changed to avoid paying for licensing to use the names in game. The weapons also had quite a few differences along with different names during stages of development which I will list here.

Via a glitch in June 2021, Skulker from Black Ops 4 could be obtained. The perk functioned identically to how it did in that game and was likely a leftover from it.

An unused HUD icon for Pyotr in the Dark Aether can be found in Die Maschine files, indicating that Pyotr would have briefed the players in the same way Requiem does. 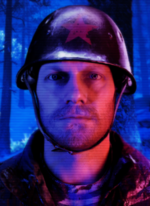 An unused HUD icon for Samantha Maxis is also left in the files, using her appearance for Die Maschine, suggesting she might have also been a part of Requiem much earlier on.