We got Exo-Suits now men, suit up, whether you like it or not, we are takin' to the skies. Also be sure to pack your clown costume.

The RPG from Modern Warfare 3 can be used via a glitch on the mission "Throttle". It functions identically to the Modern Warfare 3 version, although it is missing sounds and certain animations. 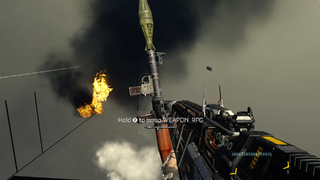 A near-complete weapon that was showcased in pre-release footage. Cut for unknown reasons.

Srapped wonder weapon meant for zombies. Cut for being too overpowered.

The last generation versions of Advanced Warfare contain some differences from the normal version of the game.