The fourth (technically seventh) game in the series, Call of Duty 4: Modern Warfare replaces World War II combat stuff with modern (well, modern back in 2007) combat stuff. The intense depiction of modern combat, coupled with a slick framerate and polished multiplayer, made the game a massive hit for future Call of Dutys to come.

Of course, this also meant it was more susceptible to being pried open for unused stuff.

In the mission The Bog, it is possible to acquire an M21 with a unique camouflage through console commands. Upon further inspection, it appears to be an early version of the Desert camo. 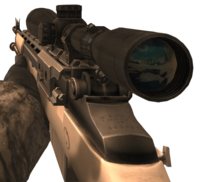 While the M249 SAW and RPD do not have any damage drop off in multiplayer, their weapon files still specify damage drop off ranges. Both weapons' damage would start to decrease after 1500 units and hit their minimum damage at 2000 units. These drop off values are different from their values in single player, which are used.

By going into the console and typing /set developer 1, you can access a hidden menu that allows you to select every level in the game regardless of how far you have progressed in the game. In this menu, it shows every level and the build dates for each level.

The original version of F.N.G. was considerably longer, going through the controls and all the game's features. Sadly, it was truncated late in development, but there's a mod that reinstates the original level.

Among the cut content was one part that would have had Sgt. Newcastle teach you how to use grenades, grenade launchers, and C4 - and because F.N.G. was forcibly made shorter, he remains complete and fully functional. A second part would have Mac teach you the basic moving controls in the obstacle course. All of the associated dialogue is still present.

Interestingly, 2016's Modern Warfare: Remastered brings all this back, for some reason. 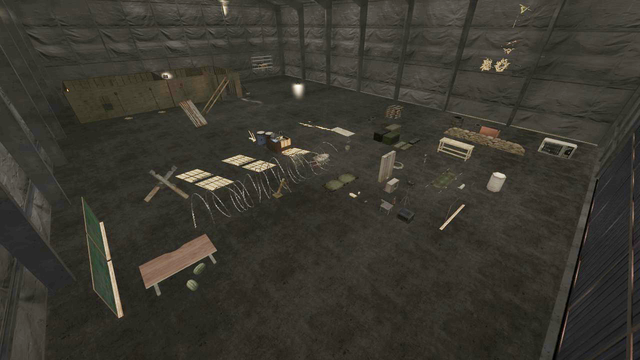 In addition, Hangar 2, pictured above, contains an unused training course which can only be seen using noclip. This area is never used in the uncut version, and most of the course has no collision.

An unused soundless video called dog_vs_player_load, showing a USMC player being killed by a dog at an unknown (possibly unused) location. In the final game, the USMC never encounter dogs in the campaign.

The video also shows an unused USMC first-person model that is completely gone from the game. The blood and gore effects are also very low-quality, likely putting this at an early point in development.

A name that appears in the unused mission strings for the cut levels "Descent", "Training", "Designated Training", and "Designated Marksman". It is possible that he was the US Marine protagonist before Paul Jackson, but he was scrapped along with said missions.

In various missions, increasing the brightness through console commands reveals that the water texture consists of a texture with numbers in it.

An enemy helicopter on a certain level can be destroyed via a grenade. While this can be done in-game, it cannot normally be encountered as it is very difficult to do. This can be seen here.

A scrapped perk where only its icon remains, code name "specialty_exposeenemy".

It would seem that the developers originally planned to have the Create-a-Class weapon icons change based on the attachment that the player equipped on it, as the game's files contain a large number of unused Create-a-Class icons for every weapon, each showing the weapon with the attachment connected to it. Some icons have files, but upon opening them the image is blank, indicating that the developers never finished creating these individual icons.

Due to a programming error, all Sniper Rifles use the M40A3's scope reticle, which leaves several unused scopes in the files.

Also present are all of the faction-specific rifle scope overlay textures from Call of Duty 2 (for the Lee-Enfield, Kar98k, Mosin-Nagant, and Springfield rifles), as well as an unused overlay version of the ACOG scope.

Present in the files are 10 unused rank icons for multiplayer.

The first three seem to be early versions of the rank icons.

The last two are highly similar in style to the used rank icons.

Most of these are also present in Call of Duty: World at War, but aren't used there either.

For some reason, the German version not only removed the dramatic gore effect upon shooting Zakhaev's hand off in the "One Shot, One Kill" mission, but Arcade Mode is disabled and cannot be unlocked.