A severely cut down port of the arcade original, although with cutscenes, different level designs, and "KiKi KaiKai Island", which replaces Magical Island in whole.

The Japanese version of this game contains leftovers from an early development stage. The string "SAMPLE VERSION" still exists among other strings in the game. 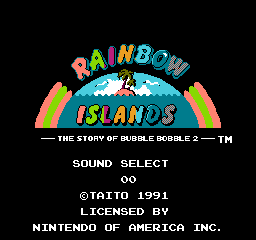 Press Up, Left, Right, Down, A, B, A, Up when the word "START" begins flashing on the title screen. Press A or B to select a melody, then press Start to play it. 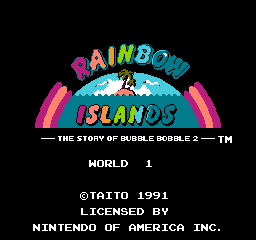 Press Left, B, Right, Up, Down, Left, Right, B when the word "START" begins flashing on the title screen. Press A or B to select a world, then press Start to play it.

The US version added a trademark symbol to the title screen and changed some copyright information. The US title screen continues to animate after the sound test or stage select codes are entered, while the Japanese version stops animating instead.

The title screen theme was also changed, originally it sounded exactly like the arcade version's High Score name entry, the US version still features some notes untouched though.

The first four islands have all had their music changed from the arcade version's very "Somewhere Over the Rainbow"-ish motif to something a bit less infringing. Only the parts of the music that could have gotten Taito in legal trouble were changed; the bridges and bass line remain unaltered.

Due to an oversight in the sound code, the music for this stage was broken! The triangle channel in the US version breaks and starts playing garbage shortly after the song begins.

When loading song pointers, a value of 00 is treated as "end of data", which means that no part of a song may start at address $xx00. In the US version, the broken part of this track starts at $8E00, which causes the game to lose its place in the song data and play garbage.

The US version's staff roll was completely redone.