LittleBigPlanet jumps in on the endless runner craze. For some reason, it was released in New Zealand a whole month before anywhere else.

An inverted image of the crocodile outfit. 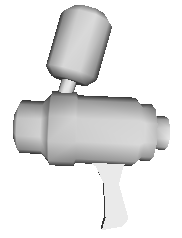 A model of the Paintinator. Whether it was intended to be a powerup or not is unknown.

SackboyDeathSpike.wav is the sound effect of Sackboy holding to retry. When you get killed by spikes, it plays the gas-death sound instead.