LittleBigPlanet is a game heavily based on user-generated content, with a lot of materials to allow players to create levels. You could make levels ranging from platformers, to minigames, to adventures, to blank levels with objects scattered everywhere.

Through hacking, it's possible to get the "Freezatron" tool, dubbed by the community as the "Ice Hazard", in your Popit. However, the tool does not work, and refuses to come out when selected. This is most likely because the tool was compiled for an earlier build of the game, and the other tools have been updated since.

The following is the leftover language data mentioning the ice tool.

Added in Game Update 1.02, the Image Import Tool allows you to import images (.PNG, .JPEG, etc.) from the PS3 HDD into in-game textures. The tool is fully completed with an in-game icon and prize data, and is fully functional when hacked into the Popit. It was never released due to concerns of players importing explicit content.

The following is associated language data for the Image Import Tool.

gamedata/levels/palettes/palette_creatures.bin is an unused level presumably put together to test the different types of NPCs LittleBigPlanet would have throughout development. The level .bin file loads in all 3 main LittleBigPlanet games however needing a modified .cha for the ant character to actually load the level without freezing. The level only exists in the first, launch disc copy of LittleBigPlanet and does not exist in the Game of the Year Edition, nor the PlayStation Network Digital version.

Upon loading the level, the only visible object is the Walker (seen below). The rest of the level was not given any form of material data, and can be replaced with Cardboard or any other material in the user's Popit by using the Material Changer.

Upon replacing the rest of the level with Cardboard, we can see some developer messages written in Material, "Socket," "New," "Old," and "Ant." "Socket" is referring to the Walker object below it, which cannot be tweaked (it sends the user to the Pod) and does not move. "New" is supposed to be the final version of Sackboy and explains why he spawns directly under the "New". "Old" has an X and a small, round object below it almost resembling a torso and a head. And below "Ant" is a giant ant-like creature.

In debug builds of LittleBigPlanet 3, enabling the "Graphics/Draw Parenting" feature shows that the Ant is a parented object. When the game is unpaused, the Ant's limbs stay attached to it, and its antennae wiggle back and forth. Though it is a materialized object, it also contains code similar to Sackboy, located in gamedata/scratch/ant.cha. 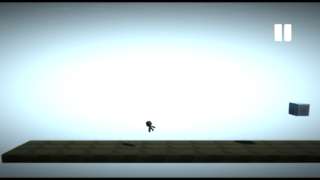 The bottom left corner of the level, with the floor material changed to Cardboard for the sake of clarity.

gamedata/levels/palettes/palette_inventory_start_creative.bin is a mostly featureless level with no background, possibly intended to be an early version of the default empty level. It contains seven long strips of material (three thick layer strips and four thin layer strips) that make up a floor extending from the far left of the level to the far right, and a white metallic square close to the bottom left corner of the level. There are no walls or ceilings, and the floor can be moved or even deleted with the Popit Cursor.

When the level is first loaded, the only visible object is the aforementioned white square; the floor has no material data, though it's possible to replace this invisible material with any unlocked material in the Popit. 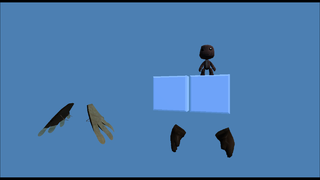 The blue squares and floating costume pieces in question.

For some reason, the Hessian Sackboy Fragrances DLC has a level associated with it, which can be found in gamedata/levels/palettes/dlc_aprilfools/pal_costumes.bin. The only objects in this level are two transparent blue squares with models for the Chicken Wings and Leather Gloves costume pieces in front of them. The exact purpose of this level is unclear. 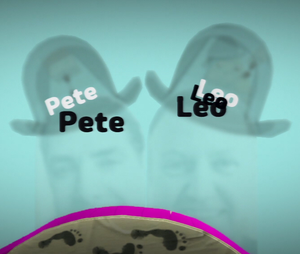 In the Introduction level, the two Media Molecule workers Pete and Leo actually have a few repeats of their names underneath themselves in black. They can't be seen normally, but when the level is loaded in Create Mode via a glitch and the objects are hidden, the names are revealed. 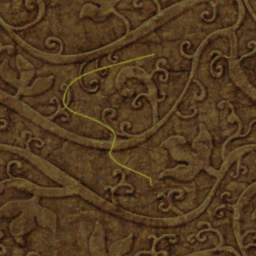 The diffuse texture of the Green Pattern Wood material from the temples theme has been scribbled on. 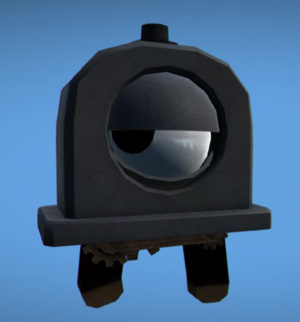 A creature internally known as the "walker". In-game, he would have been an early solution to a moving enemy. He was cut in favor of Creature Brains and Creature Legs, but you can still see references to him in the Creature Brain's tweak menu icons. He is composed of two models: gamedata/mesh_library/non_player_characters/walker/walker_head.mol and gamedata/mesh_library/non_player_characters/walker/walker_chassis.mol.

gamedata/mesh_library/player_character contains three models that appear to be remnants of the cut Ice Hazard.

sack_boy_frozen_pieces.mol is Sackboy with a shocked look on his face, but without eyes or a zipper. There are visible seams all over the mesh, suggesting it was meant to break apart into several pieces. When loaded in-game, however, it falls to the floor like a ragdoll, with none of the pieces breaking apart.

sack_boy_frozen_shell.mol is a bunch of ice shards arranged into the rough shape of a block of ice, likely intended for when the ice block is smashed. 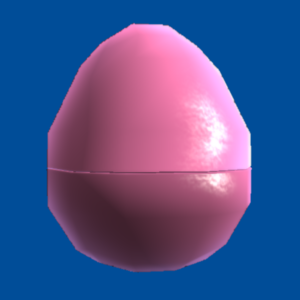 gamedata/mesh_library/common_objects/collectable_eggs/collectable_egg.mol is a plastic prize egg that appears pink in-game. This was used for storing prizes in early versions of the game, but it was replaced by the Prize Bubble late in development. This is apparent because a rooster sound is played when all of the prizes in a level have been collected. 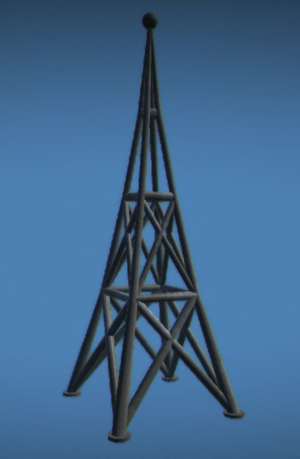 gamedata/mesh_library/cosmos/radio_tower/radio_tower.mol is a radio tower. It is found in the cosmos folder alongside other Pod-related assets, suggesting that it would have been found in the Pod. 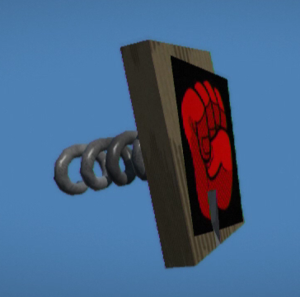 gamedata/mesh_library/cosmos/spring_sign/spring_sign.mol is a springboard with an image on the front of it. In-game, the model has physics and bounces around. The note's texture in-game is the red fist sticker. Like the radio tower, it is also located in the same folder as the other Pod-related models. 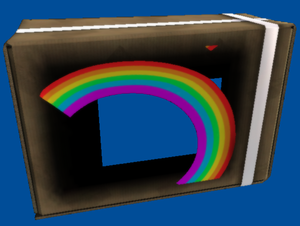 gamedata/mesh_library/cosmos/dlc_gift_box/dlc_gift_box.mol is a cardboard box with a ribbon wrapped around it and an image on the front. In-game the image is the rainbow sticker. Its path and filename suggest that it was meant to be used in the in-game store. 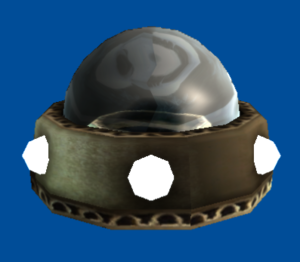 gamedata/mesh_library/cosmos/dlc_bubble/dlc_bubble.mol is a fully assembled version of the Creature Brain (the actual Creature Brain has the brain and the base stored as separate models). Its path and filename suggest that it was meant to be used in the in-game store. 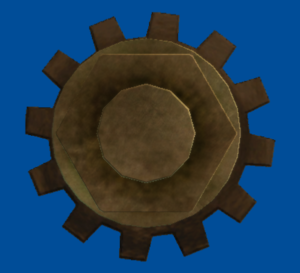 gamedata/mesh_library/common_objects/joints/joint_pin_motorised.mol appears to be an early version of the Motor Bolt. 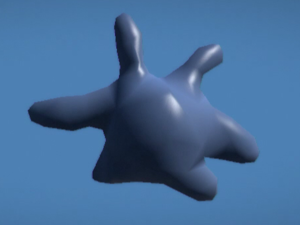 gamedata/mesh_library/decorations/glue/glue.mol is a dab of glue. It was intended to be a tool used for sticking stuff together, as seen in early gameplay. It changed to simply holding down the X button. It appears light blue in-game. A similar looking model would eventually be used in the Avalonia sections of Run Sackboy! Run!

Found within gamedata/mesh_library/player_character/sack_boy_pinched_anims are two death animations that are never usually seen. While both of these were eventually used in LittleBigPlanet 3's Character Animation Tweaker, they go unused in this game.

A death animation associated with the Electricity Hazard, where Sackboy's eyes pop out before he jumps offscreen. This was meant to be played after death_electric_loop.anim, but under normal conditions Sackboy explodes before it has a chance to play. It's possible to see part of the animation by using the Hold to Retry function as you're falling into a pit of electricity, though this only shows him jumping offscreen.

A death animation of Sackboy choking on Horrible Gas. While the animation does play upon touching Horrible Gas, Sackboy gets destroyed almost immediately, so the full animation never has a chance to play.

The final game has eight themes: The Gardens, The Savannah, The Wedding, The Canyons, The Metropolis, The Islands, The Temples and The Wilderness. However, in various places on the disc, are hints to four additional themes that are not present in the final game. Each theme had its own music and background. While the backgrounds are gone from the game's data, the ambient sounds from them still remain, and the four songs that were used for their respective themes were re-released in the Mm Music Pack 1 DLC and the Monster Pack DLC.

This also explains why there is only one music pack - because there wasn't any more music leftover to release. To further prove this, the filenames of the DLC songs each relate to the themes they would be from.

As of October 2020, the English Seaside theme was found in the March 2008 Recovery Build, and the other three themes were found in the Deploy Build in April of 2021. 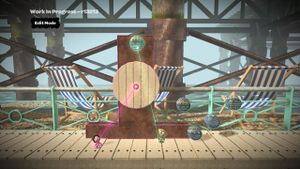 A screenshot of the beach background in use.

The most well-known theme that was once in development is the English Seaside / Beach theme. It was seen in early gameplay trailers. The interactive music track used in this theme would be later seen as "Tea by the Sea" in the Mm Music Pack 1. The internal filename for the song is i_english_s.fsb. All the models and textures for the beach background have been purged in the final game and all stickers from the theme were given out in the Savannah levels. The background would finally see the light of day in the third game as part of the Seaside Surprise DLC pack.

The following are the ambient background noises and music track from the theme:

Not much is known about this theme. Its song has the internal name i_russian_t.fsb and would later be released in the Monster Kit as "Party Ghouls".

An unknown theme. All that is known is it would take place on a western train yard. Its song has the internal name i_american_mw.fsb and would later be released under the name "Well Trained" in Mm Music Pack 1.

This theme could be a bit sketchy as there is even less known about it than the other themes. Its song has the internal name i_japanese_a.fsb and would later be released under the name "Wise Owl" in Mm Music Pack 1.

Many, MANY things from the early versions of LittleBigPlanet 2 exist as language data in the later patches of LittleBigPlanet. It is unknown why all this is in the first game, perhaps Media Molecule was planning to add the extra content as DLC?

In early gameplay footage, it is mentioned that you have to collect a certain amount of "sponge" in developer levels before you can create your own. This means each material would have a certain cost, and you'd have to collect more sponge before you could continue building. This was removed for being too tedious, however, some code still remains. It's interesting to note that the only materials mentioned here are the only materials seen in the Early Popit icons sheet. (See the Unused Graphics sub-page.)

At one point in development, you could paint stuff using a paintbrush or similar tool, and the code for this still exists in the game.

Tests were ran to see which levels used the most resources on the PS3, and here were the results.

In the raw level data for the Pod, the Info Fridge, seen in various concept art, is referenced hanging on a string. It was replaced with the Info Moon.

The infamous Ice Hazard was extremely broken and was cut from the game, but remains in the data. Here's some of its code:

Released alongside the game as a Day 1 Patch.

The vampire costumes were toned down to remove the blood dripping from the mouth.

Released on December 22nd, 2009, this update contains features and assets related to the Pirates of the Caribbean Premium Level Kit.