Spyro: Enter the Dragonfly is the only game developed by Check Six or Equinoxe. It was the first Spyro game on home consoles to be developed by a studio other than Insomniac Games, and ran into massive issues during development thanks to Universal, causing it to be delayed for a full year from its original 2001 release date.

The game is also notoriously buggy, including but not limited to the ability to easily warp to the final boss from the beginning of the game in under a minute.

Applying the below codes will re-enable a couple of debug menus. 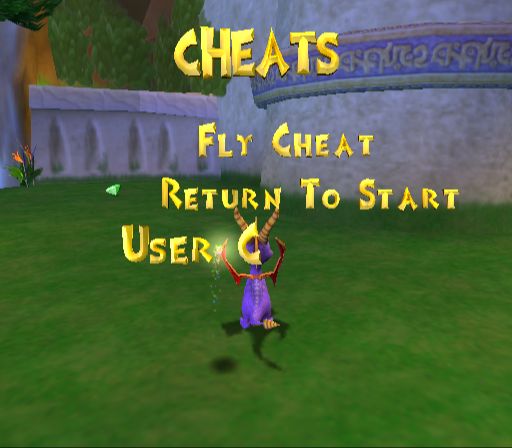 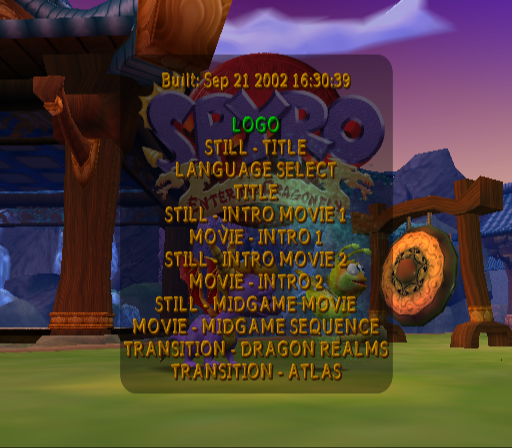 Allows you to select any level in the game, including demos and end credits.

All entries with the prefix "STILL" take you to, you guessed it, still images from various loading screens. Curiously, the still paired with "DEMO 3 - CCC PLATFORM" is an image of Cloud 9.

The start menu behaves slightly differently with these, menu sounds do not play and button icons do not render. the Atlas option simply closes the menu, and Exit Level causes a softlock. Quit Game functions normally.

Each entry on the list with the prefix of "MOVIE" is a cutscene. The intro and outro cutscenes are both split into two, and playing the first cutscene of a pair will follow up with the second. Both entries of the outro cutscene will also trigger the credits after the outro completes. 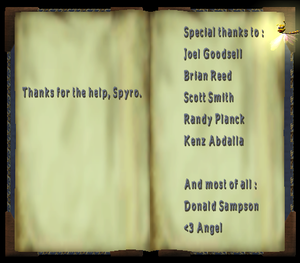 Present in the root directory is a leftover linker address map (with the same name as the executable) that contains some original sources.

Released in an IGN article dating back to March 26, 2002, the same day early builds of the game were shown off to the public.

The level "Dragonfly Dojo" had several name changes and even entire level design changes through development. Trees found in the hub refer to a level called "Sparx Pond" which actually turns out to be the original name for Dragonfly Dojo with further investigation. There are remnants from this design phase such as sand textures, palm tree textures, as well as leaves having "SP".

The level "Luau Island" was first called Dragon Keys as evident by an early piece of the script where an NPC is asking Spyro to take a Rubber Ducky from Dragon Keys. The level also was meant to have a Dragonfly Chest as evident by the chest found within Monkey Monastery which has "Luau Island" in its name - the design of the chest is also left identically to how it would've appeared in Luau Island.

The level went through multiple large revisions over development. The earliest mention of this level is in some unused text in the pre-release, which refers to the level as "Monkey Monk Mountains", whereas in early Atlas text it's called "Monkey Monk Monastery". This name is also seen in most of the final game's code, where it is abbreviated "MMM". These changes could have been made either to make the name closer to the traditional two-word level names that the Spyro series uses, or to make the level name a bit less repetitive.

Code for the Atlas entry referring to the level as Monkey Monk Monastery.

A wide array of unused textures are found within the game's files throughout a fair amount of the game's levels.

A couple of basic patterns. 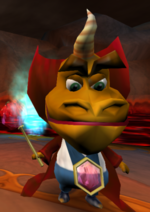 The series uses a 3D font to show words in 3D space, most notably used to show world interaction. While a full alphanumeric set is present in Enter the Dragonfly as well, their usage was scaled back to showing when you can talk to a character and in the HUD to show the count of a collected object.

As mentioned above, a full set of 3D letter models are present.

Models for just about every symbol on a regular keyboard are also present. The only ones used in-game are . and : for the timers.

The PlayStation buttons have 3D models to show a button to press in-game, but only the Triangle one is used (albeit in a different design than the others).

All four models are also present in the GameCube version.

Mid-Flute
Most likely was going to be the main theme for Enchanted Forest, considering its place on the audio CD.

Andes
Intended for a Speedway minigame within Enchanted Forest due to the BPM when compared to other Speedways, placement on the audio CD, and confirmation from the track's composer, Peter Neff.

Songa
Most likely supposed to be used for the other minigame in Enchanted Forest.

Pirates
Pirates can be heard playing within two beta clips as well as within a short unused 25-second audio file in the final game. This track would've been part of a removed level known as "Cutthroat Cove" due to the name "Pirates" matching the theme of the level. The full clip of this song is not available since it wasn't included in the final game and was not in the game's soundtrack.

Moneybags complaining about Gems. If he played a larger role in the story, this would be the way he repays you at the end of the game.

Zoe telling Spyro how to keep Sparx Healthy. The final game has Sparx teach Spyro this himself.

The only level that even uses the spitting mechanic is Honey Marsh. Aiming is used in other levels, but not the Dragon Realms.

Zoe has two unused lines. One is similar to the first interaction with Zoe in Spyro 2, while the other was replaced by Sparx saying an edited version of the line in the final game.

The game contains alternate voice clips for all of Cloud 9's NPCs. These are probably placeholders that were used before the character's final voice was decided.

Dialogue from the Cloud 9 Minigame "Defend the Puffy Palace" that is for a second, unused challenge (for which the reward would be an additional dragonfly). The final version of Cloud 9 only has one challenge:

Dialogue from the "Destroy the Riptoc Turret Factories" minigame that is for a second, unused challenge (for which the reward would be an additional dragonfly). Like Cloud 9, the final version of Monkey Monastery only has one challenge.

Alternate dialogue for the NPCs of Honey Marsh. These may be from early in development before the final voice was decided. The first clip, "Hey!", is actually used in-game, but it is used for Sparx at the end of the level and it's clear that the voice was not meant for him.

Alternate dialogue for one of the NPCs who wants you to destroy some Beehives by spitting rocks at them. These clips were also probably before they finalized the voice. They are mildly amusing though...

An alternate version of the dialogue for the first NPC you meet. This could have just been a mistake to leave in the game and the final one could have been a retake of the clip.

Alternate dialogue for all of the NPCs in Thieves Den. Interestingly, the first clip talks about an early idea for the level which is having their den turned upside-down.