In Disney's Brother Bear, human-now-bear Kenai has to reach the Salmon Run in order to get his human form back. He's aided by a fellow bear Koda, and yet threatened by his brother Denahi, who has a knack for constantly screaming at the player whilst battling him.

Like the rest of KnowWonder's Unreal Engine 1 games, Brother Bear has a special environment for debugging purposes which can be re-enabled in the default.ini config file: find the following string in the file and switch "False" to "True":

If done correctly, the game shall display debugging text and the build version should appear in the lower right corner of the pause screen. 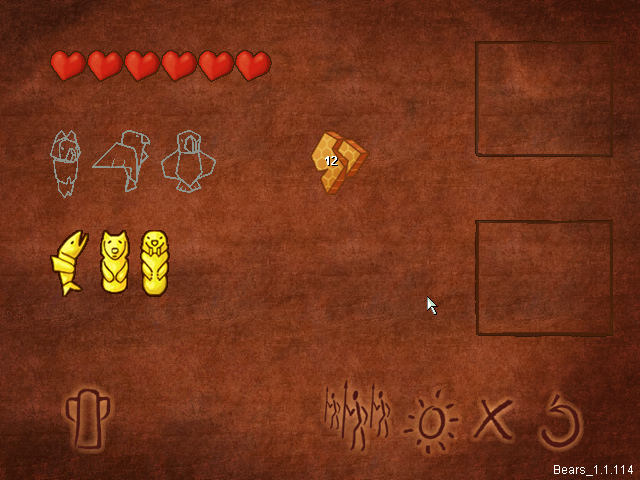 The Spanish version (shown above) has the build string Bears_1.1.114, whereas the American release has Bears_1.1.94

Allows the user to access every level, view pre-defined bookmarks, and listen to a few bits of dialogue in-game. 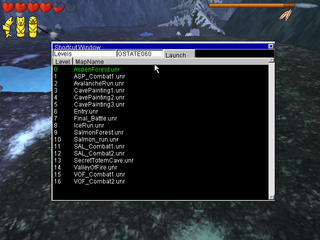 GSTATE modifies the progress in the overall game, thus altering the gameplay when selecting maps with this utility. For instance, if the user sets GSTATE to 00 and loads one of the later maps, the honeycomb pieces won't be spawned. 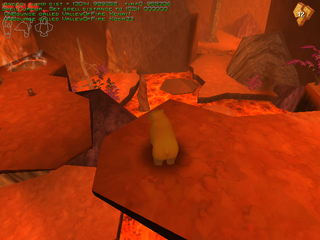 This game has a single unused level, and four stages only accessible in cutscenes or under determined circumstances (like the minigames).

This map serves for Rutt and Tuck's narrative cutscenes and the "secret" movie that is unlocked after getting all six totems. GSTATE may be set to 60 in order to play the bonus cutscene.

This location also contains an...

If the free camera is enabled, the player may head towards Rutt and Tuck's spawnpoint. Past the mountain, there is a small cube with its own skybox and floor. Kenai can be placed here by pressing Delete again.

Some of the textures used in this space can be found in Textures\DavidsBearTest.utx

A test map can be accessed using the "Levels" option; it's a cube covered with the default Unreal Engine 1 texture. Note that free camera mode does not work in this environment.

The map from the first minigame can also be explored on foot. The GSTATE value needs to be set at 00, otherwise the cutscene for the minigame will play.

The map prior to the final battle can be explored with Koda... underwater! GSTATE is required to be set at 40 or less, otherwise the cutscene for the minigame will play.

The scenario used when Kenai snatches an animal totem, only intended to be used in a cutscene. Any GSTATE value can be used.

The launcher displays saved games along a small picture of the current stage. Two of these are not used in the final game. 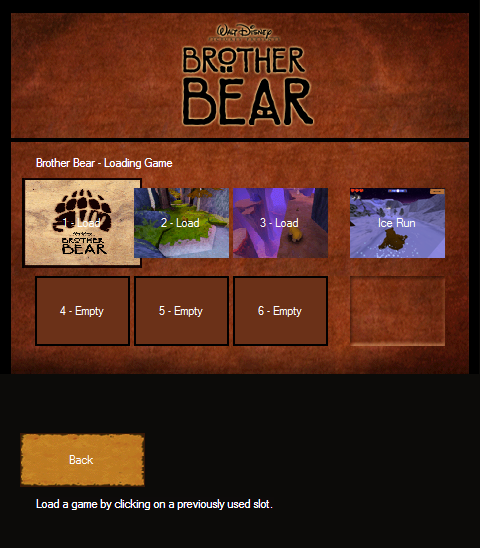 The logo used in the placeholder splash screens is stored in the Help directory within the game's installation path.

ConsoleTexReptilRm.utx has archives that don't quite belong to a Brother Bear game... at all.

A possible guide on how to make textures. This picture is featured on the following archives under the name guide2_cv.bmp.

Harry Potter and the Chamber of Secrets Remnants

Present in the game's .utx archives are many assets from the second Harry Potter game.

Most of these are also present in HPParticle.u.

Stored at System\Startup.int, nothing too fancy.

System\Window.int contains many informational messages regarding the Unreal Engine CD. The most evident strings are displayed below.

Various files scattered in the disc hint that multiple translations were planned, yet they remain as placeholders.

SETUP\BURST\Bitmaps contains many placeholder images intended for the installation/game launcher (AUTOPLAY.exe). The only finished translation, in Spanish, has a later modify date than the rest (16/10/2003 06:25 pm as opposed to 15/11/2003 05:58 pm).

warn.txt is a text file which notifies the user that installing DirectX 9.0 is required. 15 additional files detail this information in several languages. Three of these documents are placeholders that are missing its Korean, "Brazilian standard" and Taiwanese translations. These can be found in the SETUP folder and are labeled warnKO.txt, warnPS.txt, and warnTW.txt respectively.

The "Brazilian standard" (BrzStan.inf) and Korean (korea.inf) data files in SETUP\BURST\Strings were not adapted. Only one file out of four was translated to Japanese (jpn.aps).

Meant to be placed before the setup process begins. These can be found in SETUP\MEDIA.

Some files from the Unreal devkit are still present in the System folder.

A configuration file from an installation CD.

Another command-line executable. It's an audio conversion file distributed by Electronic Arts.