The Owl House - Witch's Apprentice is a 2D platformer based on the Disney Channel cartoon The Owl House.

A bar featuring a less-polished version of the UI aesthetic seen in-game.

This sprite would appear over any relic quest that was unavailable at the time, due to its corresponding level not yet having aired. Now that all of the relics have been unlocked, this sprite is inaccessible without modifying the system date.

An unlocked version of the padlock in collections_locked. This sprite was never seen in-game; instead a golden exclamation point is used to denote any available relic quests.

A gray circle referred to in the code as "debug_button".

The lower bodies of two shoppers from the "Sell, Sell, Sell!" minigame (which are usually covered by the counter) can be seen in this sheet, plus some unused UI elements. The solid and empty bars are referred to as "market_meter_backing" and "market_meter_overlay" respectively, however a different meter that more closely resembles the UI aesthetic is used in-game. A solid white arrow can be seen to the left of the unused meters, referred to in the code as "market_selection_arrow".

More shoppers and some unused UI 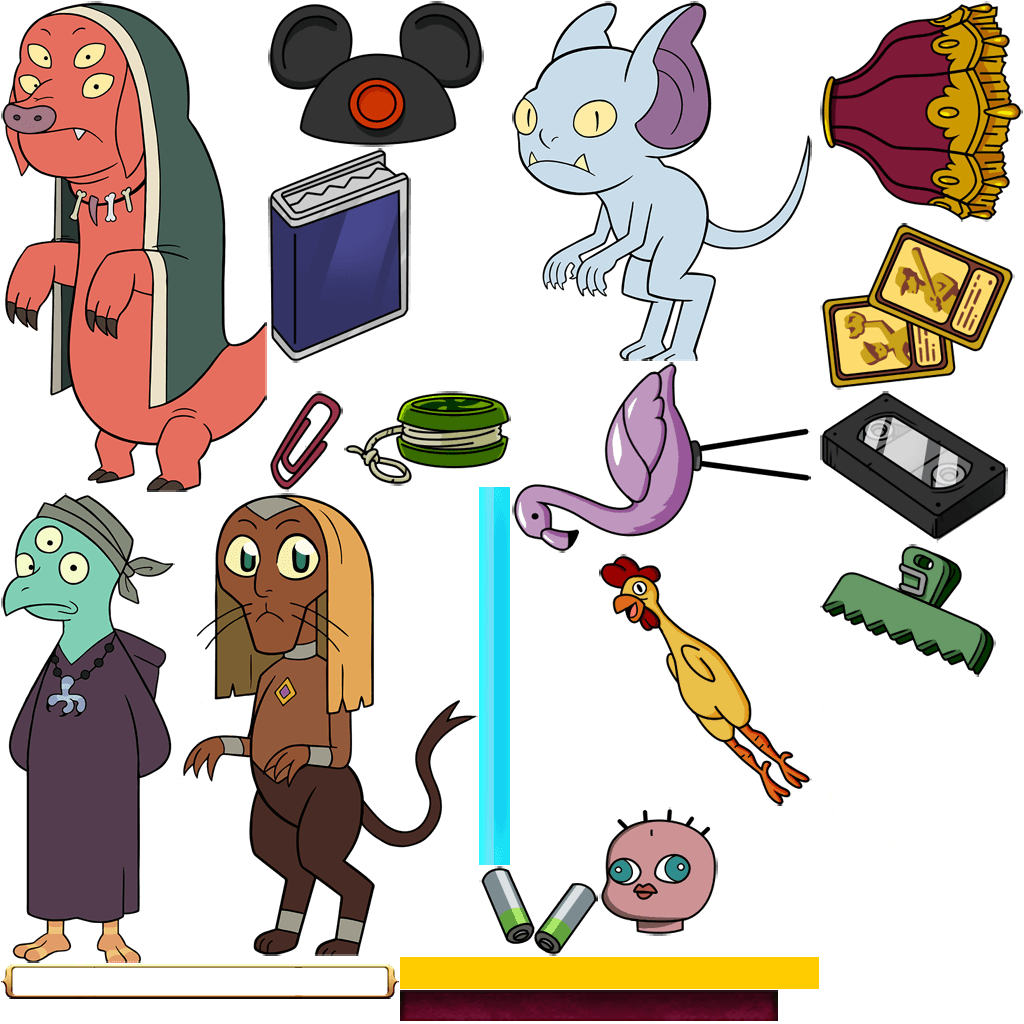 The rest of the shoppers can be found on this sheet, as well as an unused solid yellow bar named "market_meter_fill".

There is also an entirely unused second jar enemy, complete with an atlas file, bones, and even animations copied from obstacle_jar_1 then adjusted to take into account this jar's eyeball and lack of teeth (With the exception of "chomp_tongue").

Although this cauldron is fully rigged, animated, and even referred to in the game's code, it never appears in a level. Although it may not look much like an enemy, the game code that refers to this object is the same as the code for enemies that are used in the game. Interestingly, this is the only enemy sprite sheet that starts with "obstacles_" rather than "obstacle_".

Bubble particles associated with the above cauldron enemy.

Similarly to king_z, this sprite appears on Eda's sprite sheet, but is not used in any animations. 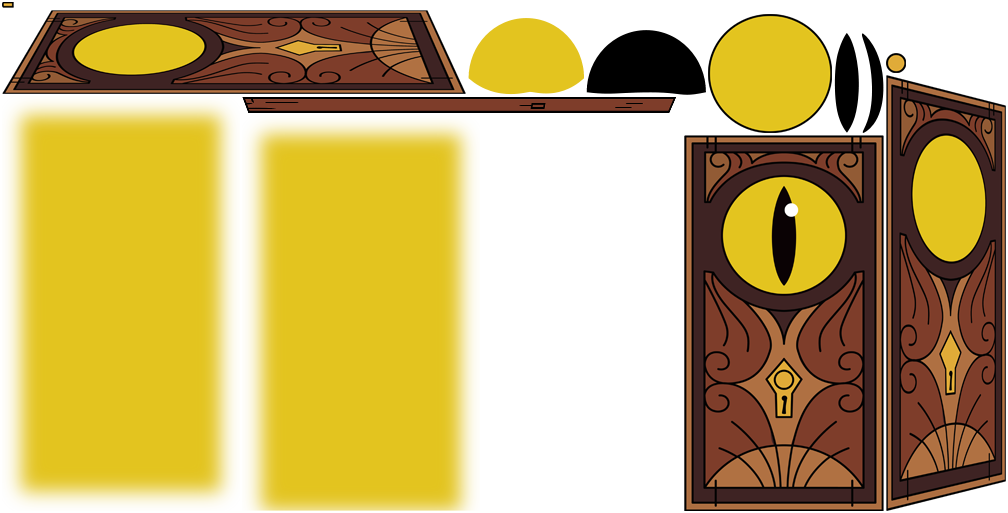 Dialogue Taken Directly from the Show

A handful of Luz's sound effects are voice lines and sounds ripped directly from the first few episodes, and these unused sound effects follow suit.

Most of these are simply alternate "cancel" dialogue for various missions that have been replaced by one single "Gimme a sec" that's used in every level, but some are entire conversations that either replaced or just completely cut from the game. All of the game's dialogue is sorted by which level it's played in, giving some hints as to what these unused conversations were intended to be like.

A config file whose contents cannot be accessed or changed in-game. While a code unlock screen exists in the game's code, neither said screen nor an achievement system are accessible through normal gameplay.

Text referring to some sort of tutorial, presumably one that would appear when starting the game for the first time. The game does contain tutorial messages within level 1 and a brief tutorial after the first level to explain the hub, but this text is not used in either of them.

A series of unused test messages. The most interesting piece of this is the [Trust +X] tags at the end of two of the responses, possibly implying some sort of "trust" system that was cut from the game. It's also worth noting that the dialogue refers to "Hex-em Hold-em," but the name of the game in the show (and in the final version of the game) is "Hexes Hold 'Em." It's unclear whether this was an error or if the name was changed sometime while the game was being developed.

One of the most interesting sections of unused text in the files, referring to some sort of shop and inventory system. This is so far detached from the gameplay of Witch's Apprentice that it's questionable if this code was ever intended to be in this game or if it was simply a holdover from some other game the developers worked on.

Text referring to an unused leaderboard system. Likely intended to work alongside one of the cut scoring systems.

Text for some sort of code entry system. The game actually has a sizable amount of code related to this screen, but it's inaccessible in-game. 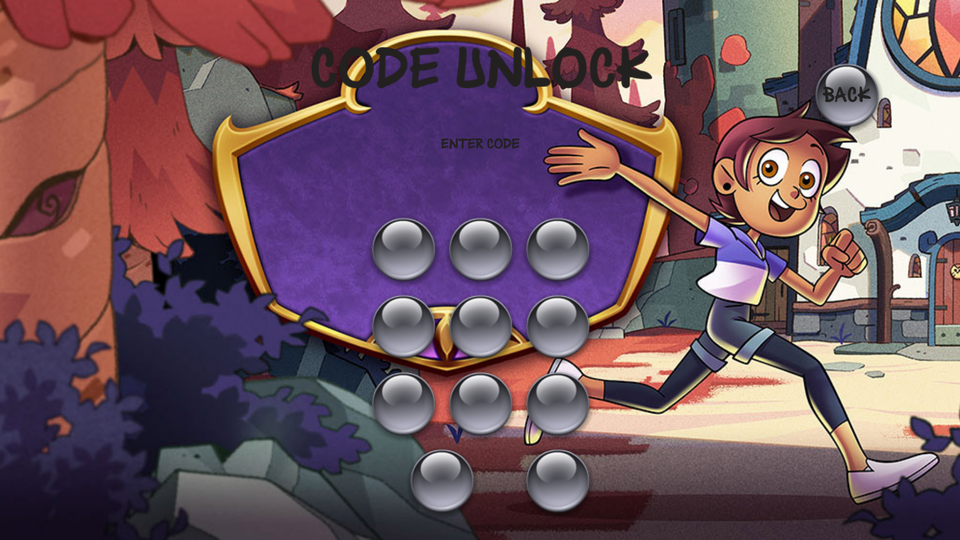 The aforementioned code entry system, opened in-game. Despite the lines above that are dedicated to adding labels to the buttons, due to some typos in the code none of these labels actually appear. All of the buttons have no noticeable function beyond animating when pressed, with the exception of the back button, which closes the menu.

Using the keyboard to type codes is also supported, but like the buttons, there's no feedback that this does anything. By using the keyboard to type in the code set in the config.xml file (00000 by default) and pressing ↵ Return, the unused flag BOOL_CODE_UNLOCK will be set to true. The flag will not be set if the same code is entered by pressing on the corresponding buttons. 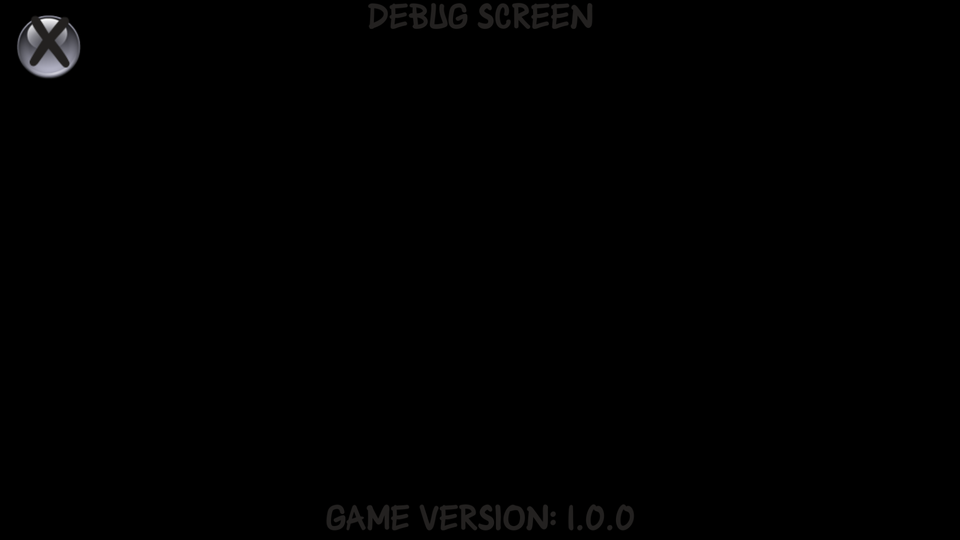 A very barren debug screen. Although the line at the bottom claims that the game version is 1.0.0, this screenshot was actually taken in version 1.05.