A pop'n music spin-off focused on the Disney franchise.

TITLE00.GCZ, which contains assets seen in the game's HUD, contains name graphics for two unused characters: Clara and Horace. These sprites, which differ heavily from the other name graphics, are also these characters' only remaining data.

L_GO_00.GCZ is an early version of GO_00.GCZ, a graphic set which contains sprites from the Results and Game Over screens. It is dated around a month earlier than the final variant.

A build date can be found as the title of the main program ISO. This only applies to Revision JA.

The JB revision also contains one additional unused graphic, labeled GG_SAMP.GCZ, which consists of a mockup screenshot of what seems to be a very early version of the game. The song currently being played (Circle of Life) also does not appear in the final game. 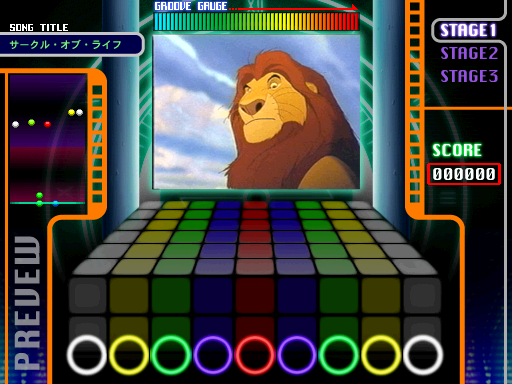