Harry Potter and the Chamber of Secrets (GameCube)

Unlike in the PC version, Harry Potter and the Chamber of Secrets is another example of how video games often vary from system to system. Like this, for instance, where you can just spam the Knockback Jinx [Flipendo] on people all day just to hear their annoyed, but often hilarious, complaints and pain sounds if you're bored.

A build date is present at 0x1FA4c for the US version and 0x1F6AA8 for the JPN version.

Dobby was supposed to be part of the game, appearing at the end as shown in these files.
He can be seen in the PinkRoom, doing some facial animation.
His body is absent and does not exist in the game (although an identical model with the body can be seen in the cinematics of the PS1 version of the game).
Apart from the facial expressions, he has 2 animations: "SV_DBY_TESTHEAD", which, according to the name, is a test animation, and the second animation "SV_DBY_STAND". 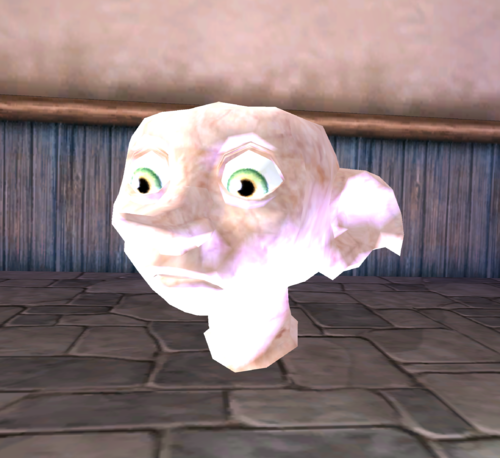 This dirty monster is the Weasley family's Ghoul!
It is a "pet" of the family that is briefly mentioned in the book as living in a room under the attic and howling when there was no noise.
He appeared in the PS1 and Gameboy Color version of the game (which is also his first physical appearance), in which Molly Weasley ask Harry, Ron, Fred, and George to shut up the ghoul.
This was followed by a boring mini-game that consisted of putting pipes that the Ghoul throws into a chest.


In the game, Molly might have asked the player to get rid of the Ghoul. But he has no animation, despite the T-Pose, which indicates that he was scrapped early enough to be replaced by the gnomes to throw. 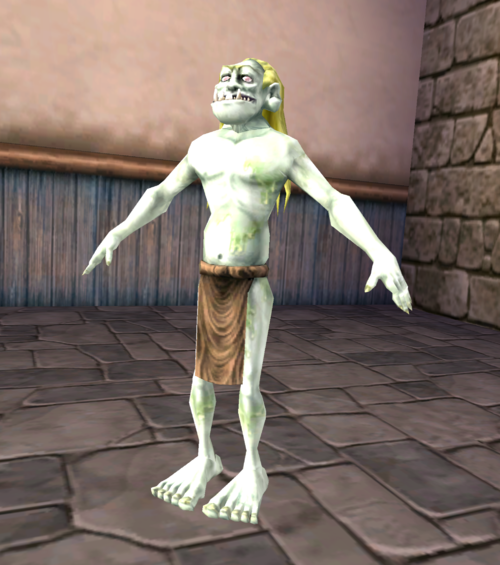 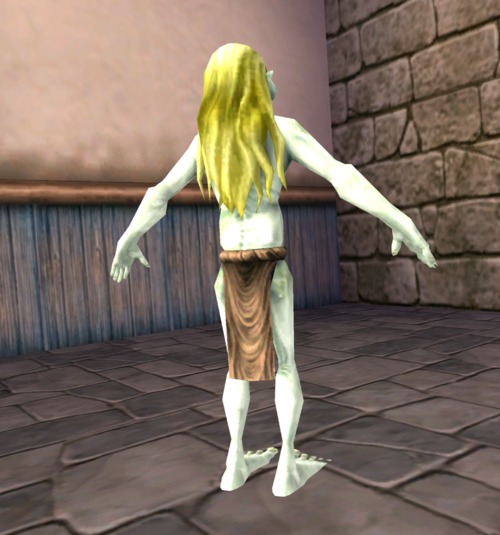 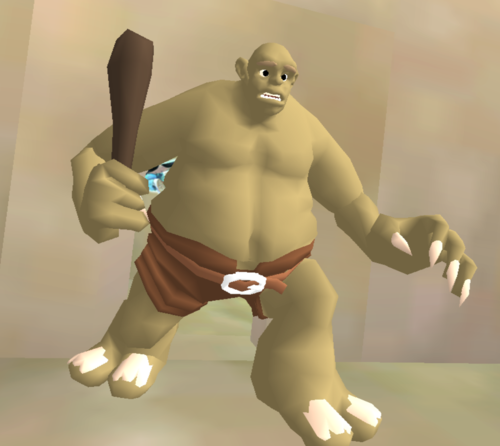 A troll is present in the game's files, especially in the test level. It appears to be in a very early state: it has no collision nor movement, just staying still and making some animations, the textures are badly done, and it has no AI. Its rejection seems quite obvious, as there is no troll in Chamber of Secrets. But according to the Eurocom developer, the project was initially supposed to be a Sorcerer's Stone game, so it's normal that many HP1 leftovers are found. 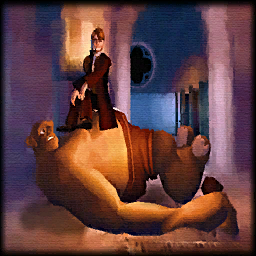 It can be seen in this painting in the DADA Class room.

Filch and his cat were supposed to be in the game, but unfortunately he is only mentioned and never physically appears, though he would do so one year later as a Prefect variant in the Library Annexe. Norris has some animations for walking, running, attacking, and for being hit by a spell, a Stink Pellet, and by Dungbombs respectively, while Flich only has a slight animation in a T-pose.
Some sounds are assigned to them in "FXmap.dbg" in the Entrance Hall, but this doesn't exist. 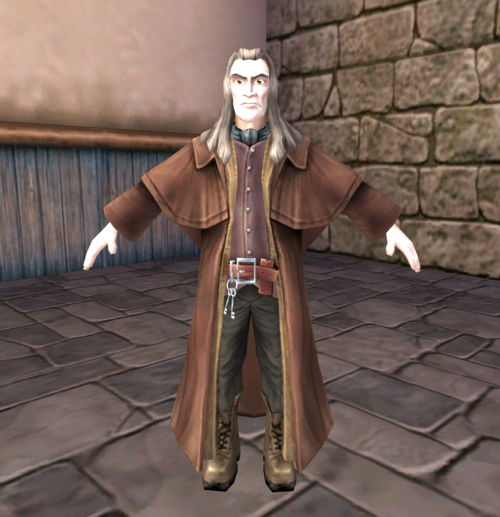 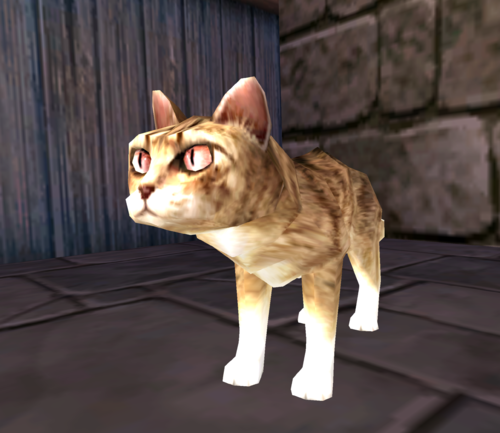 It is possible that this is originally a remnant of Sorcerer's Stone, as one of the developers claimed, but there are also lines of dialogue revealing that he could've been found at the Leaky Cauldron. The abandonment of this character is probably because Dedalus Diggle does not appear in Chamber of Secrets, whether book or movie format or in any game (except LEGO Harry Potter). The model only has animations for interacting with other NPCs. 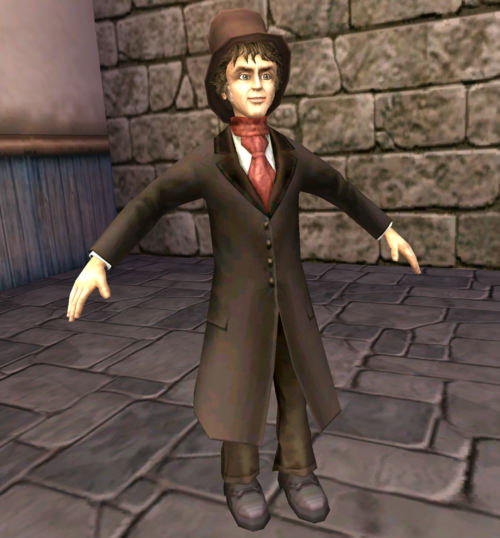 Female Prefects were supposed to appear, but never do; they don't even have dialogue lines. All variants are included in the model, which explains why they are all in the same model in the image. Note that it reuses the faces of the students used...

As before, obviously a remnant of HP1. Unfortunately, loading the model crashes the game, but it has animations for walking, sneaking, reading, sneak, "learning", "Summon Harry" and "Direct Away", etc.

In the game's files, there is a test level named "PinkRoom.geo". It can be loaded by replacing files.
This level is quite simple: there are various objects that don't always work. The most interesting thing about these objects is that there are unused ones, like a rotating trash can that gives infinite beans. But most notable is Dobby's head, which is animated (the Dobby model is actually used in the PS1 version of the game; the images used in the book are the models of the GameCube/Xbox versions). Harry seems to have an interaction in front of him. There are also scales that don't look like the ones that can be seen in the game.

This dungeon is called "PreLibry", and from its appearance, it might be an early version of the Restricted Section...


This level is really unfinished; there is no exit and it has a lot of bugs: the doors are invisible (this is fixed when a Prefect sees you), the spells don't work (even those cast by Prefects), and when you restart the level all the sounds of the game except the music and Harry's voice will be disabled. There are LOTS of chests and jars, but they are all empty. There is no overhead camera as in the final version, so the camera is always stuck between two walls.


The Prefects have slightly different behavior, more reminiscent of the PlayStation 2 version, but their spells don't work. They do chase you as in the PS2 version, however, and them catching up forces restarting the level again.


When you arrive in the big room, there is a blocked door; you were probably meant to cast Flipendo on a button. However, it's possible to get into the room after the blocked door by going through the walls via bad collision detection. You will first have to go through a secret corridor, and at the end of it there is a door that was probably implemented without a corresponding room or door to it; by crossing it, the player will find himself inside the wall and will be able to go to the last room.


At the end of the room there is a portrait; thanks to the Free Camera hack, we can see that there is a hole to get out, but the painting was not programmed to open, so this level has no exit.

A large, empty grey room named "Viewer". The file of this level notes the presence of Tom the barman (the barman from the Leaky Cauldron), as well as various information on animations; it is probable that this room was planned to test various animations.

A file named "Infirmary.geo" is present in the game, so it is likely that the infirmary was supposed to be a room in the game. However, the file is empty, with the only thing marked "INFIRMARY.A-1", so it is likely that this room was never started. It was probably deleted because the sequence of Harry's accident and his subsequent stay in the infirmary seen in the film is not present in the game.

In the Defense Against the Dark Arts class room, behind a portait, there is a hole where Harry might've been meant to pass through, but the painting is never opened. It is likely that these are the remains of a deleted challenge, or the old location of the portrait for entry into the first challenge. Note that in the next game, the hole is no longer there, but there is a poorly textured square at that location. 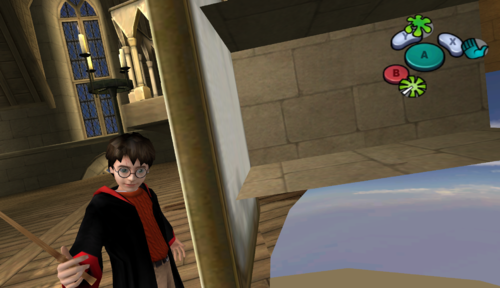 In the corridor of the library, behind the portrait that came out of the reserve, there is a piece of the floor, indicating that a double door must have originally been there instead of the portrait. 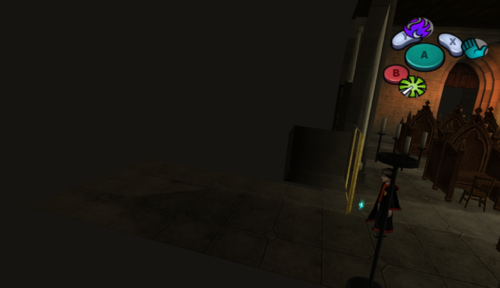 Originally, Harry would also get to use the Leg-Locker Curse rather than just the Prefects when they find him. It was probably deleted because this spell is useless, except for the sadistic pleasure of annoying people. Note that the garbled text in the second string corresponds to button prompts; a spell or item can be set to B, Y, X, or Z.

The corresponding audio files are available in this sub-page.

There is very little information about this spell, except for some unused dialogue lines that refer to it.

This spell is listed in the spell list, in the .BIN text files, and elsewhere. Unlike other spells, it is not specified as a real spell:

Harry should have been able to Petrify people!
Note that these text haven't been translated into other languages.

It is not a spell that Harry could have cast, but its existence in the game is revealed by assigned sound files and actions that are listed in "FXmap.dbg". It has actions to be hit by a Dungbomb and to walk, indicating that it is simply the Rabbit in question and not the spell. It had to be removed very early in the development.

Found in "Test_DP", it seems to be a very compressed poster. Because of the low quality of the texture, it is difficult to determine if it is Fred, George, or Ron, and the purpose of this texture is unknown.

Inside the langtext directory of the Filesystem, one can find the .BIN files, which are all for captions of dialogue in-game. Though some are unused...

This is literally a cut-and-paste of the prologue of the PC version of the game. It would have made more sense for the game to start directly with Harry and Ron arriving at the Burrow. But apart from this text, there is no data about this cutscene.

Who knows? It is possible these were temporary strings to ensure no Wizard Card ended up using the wrong text string, when the later cards would display in the Folio Magi. This string appears 10 times.

The first line in this suggests the Lumos spell was to be toggleable, as Nox is the canon incantation to disspell Lumos. However, the spell was ultimately made to dissipate after a short time, making Nox unnecessary. The latter lines here are generic-styled pickup text strings, while the PAUSED_CONTINUE string is what it is, for pausing the game.

The other strings after it are never displayed; the first is plainly obvious, no text is displayed when picking up a Wizard Card at the moment it vanishes in Harry's hand, and neither Knuts nor Galleons appear in Diagon Alley.

Much like before, these are generic strings for collecting mandatory items for Harry's second-year adventure at Hogwarts.

The game contains a cheat menu for developers, containing the possibility to go to any level (day or night), to have all the spells, and to obtain Dungbombs (which are unused).
It is stored in a file named "cheats.txt"; unfortunately, nobody has managed to get it to work yet.

It can be seen in action in a video by a former developer of Eurocom (the company no longer exists), who performs various commands with the menu on the Xbox version, going to the pink room and a test map mentioned above.