Might and Magic: Clouds of Xeen is the fourth game in the award-winning Might and Magic series of first-person dungeon crawler role-playing games. This time around, it seems that some Skeletor wannabe came out of nowhere and decided to take over one side of the two-sided world of Xeen. As usual, it's up to a party of up to six adventurers to go out, kick some monster hide, and fix everything.

Since the World of Xeen games were made using the coding and interface from the previous game, there are a few random bits-and-bobs left over from that game which can be found through save game editing.

Note: A majority of the following also applies to the next game, as they share most of the same engine. 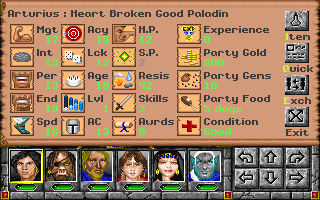 By messing with a character's values (in this case, race and gender), one can find strings for various location names, status ailments, and even the previous games' character alignments (Good, Neutral, and Evil). In the Xeen games, Alignment goes completely unused, so the byte that was previously used to determine a character's alignment became a value which tells the game if a character is in Clouds of Xeen or Darkside of Xeen.

In the previous two games, the player could add two more members to their party. These extra party members, known as "Hirelings", could be found at any of the inns of the game and, like the name implies, they would stay with the party for as long as they could cover the costs of hiring them. Some of the coding for this system remains within the Xeen games and even works... to a point. 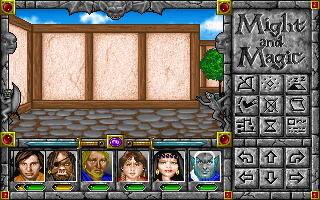 Forcing the game to add a seventh member to the party is somewhat bug-free. The seventh character's portrait displays over-and-to-the-right of the first character's while their hit point crystal is aligned to the bottom-right of their portrait.

For all intents and purposes, the game even recognizes the extra party member as being valid and functional and can do just about anything any of the other six members can. However, there are some caveats, most of which can be negated by swapping them with another party member in the character sheets: 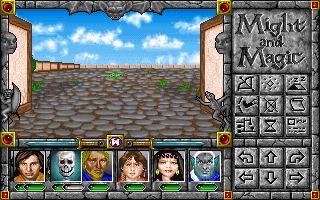 Trying to add an eighth character to your roster results in something a little more spectacularly broken.

For whatever reason, any character placed in the eighth slot will have their data severely corrupted with junk data. As a result, their name and personally-identifiable information will be changed to be wiped, their stats will skyrocket to the maximum possible values (including temporary values), they'll have every single Spell (inaccessible, due to not being a spell caster), Skill, and Award possible, be given a glitched inventory full of junk items, and have varying degrees of every single status ailment possible, even if it doesn't make sense.

Exiting the character sheets after looking at theirs crashes the game with the above error message. 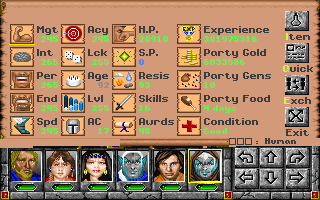 Removing extra party members and resurrecting the eighth member at a temple doesn't fix their stats, nor does it make them fully-functional. Attacking with them will always crash the game and, since they don't have a class, they can never equip anything. However, it does make them the single most powerful member of your party, able to survive any attack, open any lock, smash any gates, and so on. Either way, it's abundantly clear that the designers never intended for the party to have eight members, again.

Also, like with the seventh character, the eighth is correctly registered with the Inn as being "In Party,", as well as showing up as a choice (F8) on interactions, despite being unselectable.