This page details one or more prototype versions of Might and Magic V.

In 1993, New World Computing released a non-interactive game demo for their upcoming Might and Magic V: Darkside of Xeen. Unlike the previous demo, this one's engine was more in-line with that of the final product. However, there were still a handful of changes between the demo and the final game.

The "View Endgame" option on the title screen was exchanged for "Other Options," in the final game. Additionally, the font for the options is a bit different.

Distant sprites are rendered a little differently, in the final game.

The overworld pathways still use the Clouds of Xeen cobblestones, rather than the shattered-looking dark stone. Additionally, the mini-map icon for said pathway is either miscolored, or has been altered, in the demo.

The demo takes the player (or viewer) on a path that would later become A4 X14 Y11 to A3 X04 Y09, in the final game. Strangely, it's the only time the Minimap is active in the entire demo. As such, it's also the easiest part of the game to compare to the final version.

Many objects were added to that area of the final game's map:

Additionally, in the final, there is a load point six squares north of town leading from A4 to A3. This is because while the overworld in the demo is one double-sized map, the overworld is split into 24 separate maps organized into a 4-by-8 grid, in the final.

Four different locations are highlighted in the demo: a town, a "tower," the overworld, and a "dungeon." All of the locations do end up in the final game, though the dungeons, in particular, received some noteworthy changes.

The tower within the town – which would later become Ellinger's tower – leads into what appears to be a… mine. This "tower mine" segment would later become the southwest corner of the Sandcaster Sewers (from X03 Y05) and, as such, gained some water and a sewer grate. 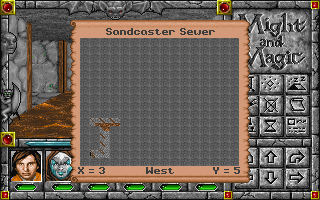 Here's a map of the relevant segment of the Sandcaster Sewers, from the final.

A dungeon sits within a circle of mountains and surrounded by immobile monsters (for demonstration purposes). In the final game, this dungeon is replaced by a tower, instead.

Also of note, the sign on the overworld pointing to the dungeon was also changed to reflect the dungeon becoming a tower.

Amusingly, what served as a place to show off more monsters and end the demo became a part of a relatively-peaceful area, in the final game: the Castle Kalindra Dungeon (starting at X13 Y15). As such, its graphic set and music loop was changed from the dungeon set to the castle one. (It makes sense in the context of the game, really!) 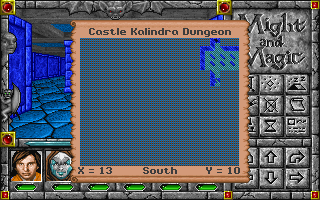 Here's a map of the relevant segment of the Castle Kalindra Dungeon, from the final.