The other version of Might and Magic II, with reworked graphics and sound that made the game feel much more like a traditional console RPG. 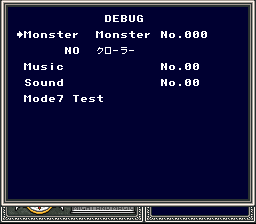 There is a small debug menu which can be accessed by using the Pro Action Replay codes 01B37AF4, 01B37B89, and 01B37C1B. Once you've entered the codes, press A and the debug menu will appear instead of the regular menu. From here, press A to select any of the four menu options, use the D-Pad to change its value, then press A again to confirm. Press B to exit the menu.

The monster option allows you to battle against any monster type. The text next to the monster's name indicates whether or not a battle will occur against the selected monster after exiting the menu.

Mode7 Test doesn't work properly when the debug menu is accessed this way. It is not known if there still exists a way to use this feature as intended.

This track doesn't appear in any location in the game, and there is no code which explicitly references it. It sounds like it may have been used as battle music, such as in the final battle against Sheltem, which just uses the regular boss music.

This simple placeholder takes up several track numbers in the sound test; it may have been used to replace music which had been deleted during development.