Might and Magic II was ported to lots of platforms. The SNES, not surprisingly, was one of them. A completely separate port by a different developer was also released in Japan, featuring the same plot, locations, and gameplay, but with completely reworked graphics and music.

The game was completely rushed to production, featuring broken spells (such as the Light, Jump and Levitate spells being completely useless) and gameplay / exploit "fixes" such as items costing 10x what they were, vital permanent stat boosters not working at all, a ridiculous amount of bugs, and most EXP farms nerfed to the point you need to find other EXP exploits. This makes the game absurdly difficult to a ridiculous degree. An American proto exists that wasn't released (for good reason). 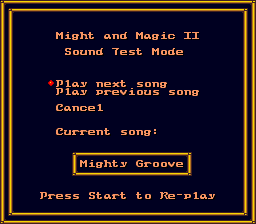 There is a hidden sound test which can be accessed by pressing L + R + X + Start at the main menu.