Heroes of Might and Magic: A Strategic Quest is the first installment of a popular series of turn-based strategy games.

Although fully scripted, animated, and having its own sound, there are no negative luck modifiers in the game, so it can't be aquired by the player. It's possible the "Fizbin of Misfortune" artifact once gave a player negative luck, given it's name, but in the final game it just induces bad morale.

Comparing with a few screenshots from the Winter CES 1994 preview, objects from OBJECT32.ICN and OVRLAy32.ICN are only decreased miniatures of discarded objects. 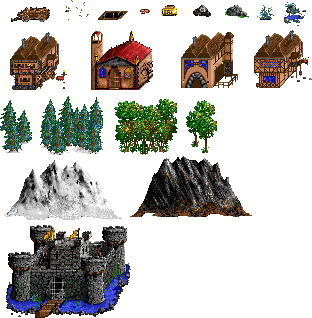 However, a few shrunken objects were reused in the final release:

Unlike the objects above, it's stacked in one file with a group of available Adventure Map objects, but for some reason, this rock is not used in the game.

At one point in development, players had to click this button every time they wanted to fire a boulder off during sieges. In the final game, this action is automated.

Can be found in some prerelease screenshots. Probably before different crests were introduced, players had in their place sleep (moon)/wake (knight) a hero functionality.

For 1-hex and 2-hex creatures. Probably were meant to mark active creature (finally they have golden glowing rim), but there is no code left for this feature.

Only one line of text in the game .exe mentions battle cowardice. Probably surrendering or fleeing the battle would decrease hero's morale as much, as many times he left the battlefield infamously.

English 1.0 version for Windows contains debug menu that can be accessed by changing byte 00 at 503D2 adress to 01. After enabling debug menu many objects on map will show their coordinates and additional info, moreover enemy hero path will be visible. In the game folder a new kb.txt file will be created containing logs from the last played scenario.

In Russian 1.1 version from Buka adress of byte is 3DE25. In this version kb.txt log won't be created.