Might and Magic: Darkside of Xeen is the fifth game of the Might and Magic series. A masked man with an infectious laugh has taken over the Darkside of the Xylonite Experimental Expansion Nacelle, locking that world's leaders within their own homes and turning their monstrous "friends" against them! Luckily, a random herbalist finds their distress beacon and, naturally, pawns it off to the first group of six people she sees. 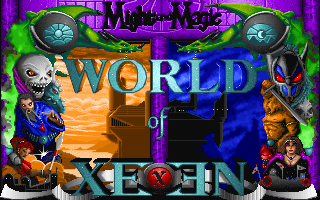 Much like Sega's Sonic the Hedgehog 3 & Knuckles, Clouds and Darkside were designed to tell one expansive story. If installing Darkside of Xeen on a computer that already has Clouds of Xeen installed, an option to combine the two into a one game – World of Xeen – will be given. This allows players to jump back-and-forth between the two worlds and complete a few additional quests. This also brought about a few minor changes to various things.

The blacksmith's FM-synthesis hammer sound (heard when using AdLib or Sound Blaster sound cards) significantly differs between revisions of the game, with the World of Xeen version being far less abrasive and much longer.

Released in 1994, the CD-ROM version of World of Xeen was presented as the whole Xeen package all-in-one.

When the combined game was ported to MacOS Classic by Presage Software, Inc in 1995, the game was further updated with a number of changes.