Phantasy Star III is the third game in the futuristic Phantasy Star RPG series, and is quite a deviation from the first two. It features a unique "Generation" system, in which characters get married, have children, and their children continue on the adventure. Unfortunately, production was rushed, and it shows. 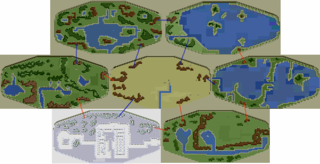 The Alisa III features seven distinct "biospheres", each with its own overworld map, arranged in a hexagon formation. These biospheres are all interconnected to adjacent ones via a series of tunnels, many of which are sealed off by default, and can only be opened if you're carrying a specific jewel. With the exception of the central "hub", Aridia (which borders all six of the others), each biosphere contains exactly three tunnels to its neighbors.

Due to the nature of the game and its branching paths, it's entirely possible that some of these tunnels will end up unexplored over the course of the game... however, there are six such tunnels that can never be entered, at any point, and under any circumstances. These are as follows: 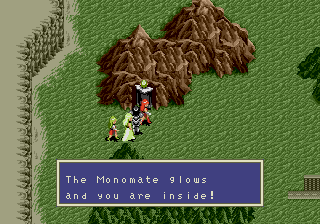 As you may notice, this means that none of Terminus' three tunnels are accessible. There's good enough reason for this in-game (it's basically a world of pure evil), but not so much for the others. It's possible to modify event flags in a save state, in which the caves can be "entered", but the item listed as breaking the seal on each of them is a Monomate (obviously a default value), and you're teleported directly to the other side, as it appears no interiors were ever created.

This doesn't really have a significant effect in-game, as by the time the latter biospheres become relevant, you'll have access to the Layan Temples (which serve the same purpose, and more directly so), but it's nevertheless curious, and suggests that the game may have been planned to feature far more branching paths than it ended up having.

There are several unused items hidden away in the game. Whether they were left out intentionally or by accident is anyone's guess.

Two sets of shop data exist that do not appear to match any of the in-game stores. The weapon shop is very similar to that of Techna's, selling a Laconian Slicer rather than a Force Bow (available at Arrone instead), while the armor shop is very similar to that of Mystoke's, selling a Royal Protector rather than a pair of Royal Boots (available in Rysel instead). It is possible these are an early version of each of those shops, or they were possibly intended for a planned town that never made it into the game.

All enemies are stored in groups of three sharing the same graphics but different palettes, but not all members of those groups are used.

Part of the "Disk" enemy group. Slightly stronger than a Flopper, but weaker than a Carder. Probably meant for the early third generation, as it gives only slightly more experience and Meseta than a Flopper.

The mid-level "attack bot"-type enemy. Stats-wise it's stronger than an AgriBot, but only slightly, and gives a much better exp. and Meseta reward. Probably meant for somewhere along Ayn's path. Interestingly, in the PlayStation 2 port (also likely on the PSP counterpart) on the Sega Genesis Collection (also known as Sega Mega Drive Collection in some regions), he appears in several dungeons during Ayn's path.

The strongest "Harpy"-type monster, and a significant step up from a Griffin in every regard. This would have fit in nicely in any of the Terminus tunnels, had they been used, or in an area like Skyhaven Dungeon or Sage Isle.

The weakest imp-type, but far too advanced in terms of stats and reward for a first generation foe. Likely intended for another cut tunnel, presumably along Nial's path. This is the only front-row enemy removed. Interestingly, on the PS2 port of the game (also likely on its PSP counterpart), he can be found in outdoors Aridia starting with Rhys, oddly enough. He likely through all generations, as that's the case for other enemies in Aridia first appearing in Rhys' path. It is unknown if the aforementioned port of the game contains anymore unused enemies.

The strongest lizard warrior-type. It's rather unremarkable all around, and was probably intended to be used late in Nial's path, or early in the third generation, as the enemy group it belongs to has no palette show up in the third generation. It was possible he was removed due to censorship reasons, as his legs resemble those of a nude human male.

Sandwiched between the "Emir" and "Caliph" swordsmen. Not much to say here, as it's not very different stats-wise from an Emir. Likely just intended to be used mid in the third generation. It was possible he was removed due to censorship reasons, as his colourings resemble those of a nude human male.

Lower HP than a Skeleton, but higher stats and a better reward. Probably intended for a Terminus tunnel or somewhere mid-late in the third generation, such as an area like the Aridia-Frigidia passage. This is the only monster group to have two enemies cut from it, leaving only the Wraith used in-game. 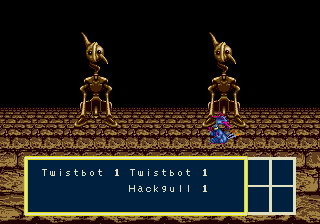 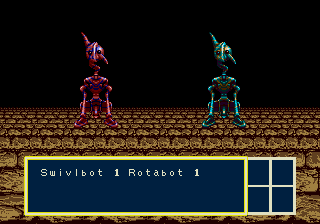 In addition to the above enemies, an entire group of enemies was not used: Twistbot, Swivlbot, and Rotabot. Interestingly, in the Game Boy Advance port, they can be seen in Mystoke Castle. They also appear in the Japanese version of the game, again, in Mystoke Castle, and some other random locations. In the US/EU rom of the game, all of their formations are replaced by either a Roboman, Mechman, or Droidman, who still do appear within the Japanese version of the game.

Data exists in the ROM among the other bosses for Kara, interestingly listed between Lune and Siren among the bosses of the second generation. All of the data for this boss is still present, including animations, showing the "Warrior" Kara seen in the final's Sean and Crys generations. These graphics are also present in the GBA port.

It's difficult to see where this boss fight would have gone. In terms of stats, she is roughly comparable to the second-generation miniboss Sari, and by the third generation her stats would have been closer to that of common enemies. It’s possible that these are only placeholder stats and would have had different stats if she was actually used as a boss.

Among the enemy groups in the Aridia editor, some formations don't seem to be used anywhere in the game, such as two Zarachne's guarding a Crusher, a single Droidman (such a formation already exists, but this specific group is not), and a Lizrd guarding a Droidman. It is likely they were supposed to appear in areas where similar formations exist. 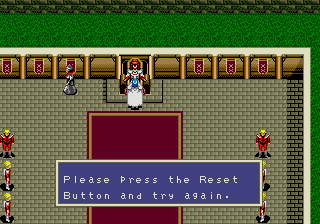 Start up a new game. Before doing anything else, head to the nearest shop, sell your boots, and buy an Escapipe. Play the game normally until Rhys is thrown into the dungeon. Now, instead of opening the chests to advance the storyline, use the Escapipe. You'll be teleported out of your cell and back to the entrance of the dungeon...which throws the game's normal event progression out of whack, preventing you from advancing any further. You cannot interact with the usually-inaccessible NPCs in the hall, and Maia will be placed back in Rhys' room, also rendered moot as her event will not trigger again. Fortunately, the developers realized someone might try to pull off this trick and gave the king a helpful error message, as seen in the above screenshot. 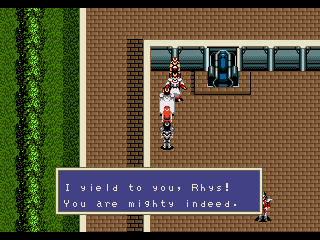 The development team may have caught that one, but it isn't the only opportunity to shatter the plot with an Escapipe. At the start of Generation 2 (Lena path), you can use an Escapipe in your throne room to return to the Cille Castle dungeon from the end of Generation 1. All the random encounters are replaced with Chirpers, for some odd reason (likely a default). King Cille's back, and will gladly accept a rematch. Beat him again, and you'll get the marriage options for Nail as if you just beat Generation 2!

Be careful, though! You'll have to select the second option, otherwise you'll miss out on a plot-specific item that the game normally assumes you have, rendering Generation 3 unwinnable!

For both Sean and Crys, however, using one will render the game unbeatable, as it will take you to Techna's dungeon (the enemy encounters are all a single Chirper, yet again), and there are no ships to Azura in the third generation no matter who your character is. You don't have Aero Parts for Wren or his Sub Parts, so you're stuck on Techna Island, making the game unbeatable.

In the Japanese version, in battle the ground scrolls as well as the rooftop or clouds. In the American/European version, only the clouds scroll in overworlds, and neither rooftops or grounds scroll elsewhere.

The Virtual Console version of the game includes a plaintext ASM patch - complete with developer comments in Japanese - that is applied to the game in real-time. The patch fixes a bug that would cause garbage sprites to appear on the SEGA logo screen after a game-over, and removes the red cross in the Nurse's portrait, as the Red Cross organisation does not like the symbol being used for recreational purposes.