As New Genesis is built off of and shares a lot of the same files as PSO2's engine, unused assets found within the win32reboot folder should be placed here. Common internal names for New Genesis include reboot and ep7, while base PSO2 is referred to as classic.

The CPK file used for Aerio's music (0f3f071bbfb6e89bd45cc51a8f8c3a) contains this set of intro segments, labelled GL_Ad_I01. These are currently not used, and are very similar to the unused segments found within classic's Forest music CPK file.

NOTE; Regional differences applicable to PSO2 Classic which were introduced prior to the release of New Genesis will not be documented here but rather in the original page for Phantasy Star Online 2. 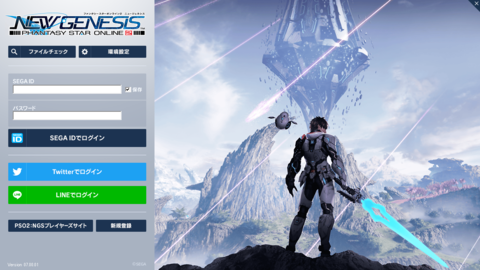 The Japanese PC launcher has a login screen not present in the Global version as players are logged in automatically using the account of the platform they use to launch the game on (e.g Steam, Epic Games Store, MS Store)

The Japanese and Global launchers are one-to-one for the most part, but the Global version lacks the option to launch the Cloud version of the game or to scan the file integrity; as the latter is handled through platforms like Steam, Epic Games or the MS Store.

As is the case with a lot of Sega international releases, the light-blue logo representing Sega of Japan is replaced with the dark blue logo used to represent Sega's Western branches.

The Katakana of the game's title is removed from the Global version's logo and the text "PUSH ENTER KEY" became "PRESS THE ENTER KEY".

Another change carried over from PSO2 Classic is the removal of options relating to Phantasy Star Online 2 ES, as said game did not see a Global release.