From The Cutting Room Floor
Jump to navigation Jump to search
This page contains changes which are not marked for translation.
Other languages:
Deutsch • ‎English • ‎español • ‎日本語

Pikmin 2 eschews the survival aspect of the first game in favor of money, money, and money! Olimar and Louie must erase their company's debt by collecting blatant product placement ancient artifacts and throwing Pikmin at anything that moves. The game was later remade for the Wii.

This article was brought to you by DURACELL®.

A fully functional test map can be found on the disc at /user/Kando/map/newtest. The level can be accessed as its own proper world by following this video, or by swapping the level model and object data with The Perplexing Pool's (yakushima) on the disc with this RAR file:

A slightly different version of the test map can be located in /user/Kando/zukan. This map is identical to the other version, with the exception of the footstep sound test tiles being removed, and the texture map being very, very slightly shifted.

Caves are made up of randomly laid out map units (located on /user/Mukki/mapunits/units), specific to each sublevel. These units are unused: 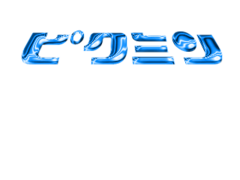 Title.bti
This is the word "Pikmin" in blue chrome(?).

Graphics for two development programs are present in /user/Kando/develop.

mapeditor.arc
Map editor icons, including a mouse and zoom button, as well as GameCube buttons.

mapcode_tex.arc
Graphics for every type of surface on the main fields.

rocket.00.bti
An unused early version of the ship icon is present in the world map graphics.

Found in anmedit2d.arc is keyedit.blo. Found in j2dtest.arc is test.blo.
These .blo use the format "scrnblo1" while the rest of Pikmin 2 uses "scrnblo2", meaning these are likely from an early point in development.

An early map screen is stored in /new_screen/jpn/worldmap.szs, texture name world_map_info_00. It is very different from the final map screen:

This is a wire-frame image of the Perplexing Pool found in the Piklopedia. It can be faintly seen decorating the background on the Piklopedia, but only a portion of it is shown. It's also on the file selection menu's files, for whatever reason.

The wire-frame is based on the Piklopedia/Treasure Hoard version of the Perplexing Pool, where the starting area is noticeably different. But even then, it looks like it depicts an even earlier version of the Perplexing Pool. The Shower Room section is missing, and so is the pipe sticking out of the floor nearby, and there seems to be geometry for land and islands to the south and southeast of the landing site, which are missing from the in-game Piklopedia model. They're likely remnants from The Distant Spring in Pikmin.

This dummy image is found in the Piklopedia, probably used in development for creatures that did not have a finished icon.

A dummy texture present in the Waterwraith's model file. Because the Waterwraith's main look is created with frame buffer shaders, this underlying texture is never normally seen, and may have been present to warn the modeler that the shader is missing.

This texture is also used in The Legend of Zelda: Twilight Princess, where it presumably had the same purpose.

When you collect a cherry in 2-Player Battle, you get to use one power. These 3 textures are found alongside the possible powerup textures. It seems like they would drop the corresponding enemies on the opponent's army, but they might have been removed for being too cheap. These can be found in /user/Kando/vstex/arc.szs, and there's also a duplicate of teki_otakara.bti (the Dweevil one) under the name teki_otakara_old.bti.

An error icon to be shown on a cave's loading screen. If the current font does not support a certain character, it gets replaced with this. This can be seen, for instance, by running a Japanese game and using a code to force the use of the early English text. The icon's text translates to "error", as you'd expect. Found in /newscreen/<any language>/res_floor_name_eng_pal.szs/timg/err.bti.

Data for a game over screen exists in-game, in /new_screen/<any language>/res_gameover.szs. Most of the graphics within are the same as in other screens, but two of the textures are the words "GAME OVER" (one of them is just an alpha channel of sorts). This texture is present in all versions of the game, and in the res_gameover.szs of all region folders inside /new_screen.

When an area is loading, you're shown the area's name and behind it, you have some graphic being distorted in a flame-in-the-wind effect. You also get this on the "Today's Report" title at the end of a day. You'd expect the graphics behind the text to be exactly the same as the text itself, but since you can't really understand what it says, the developers took the lazy route and used vastly different graphics.

"今日の成績". This translates to "Today's Results". This is the texture used on the Awakening Wood's loading screen. To note is that in Japan, the Today's Report screen actually shows the title "今日の報告" ("Today's Report").

"Challenge Cave". Not only is this name not seen anywhere else in the game, but its font is also a bit different in that it has a border. This is the texture used on the Perplexing Pool and Wistful Wild's loading screens. 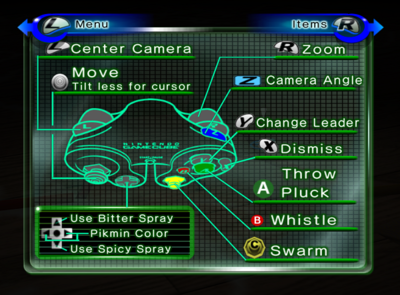 An unused fourth page of the pause menu is still fully implemented in the game, and can be re-enabled with a simple flag change. It depicts the controls, and while similar to the screen in Pikmin 1, it includes how to use to sprays and other new features. It seems to have been scrapped before the other 3 menus got their final design, considering its simpler appearance. The text was all emptied out, however, so this screenshot is only assuming what the text may have been.

If you look at the President's cockpit in the golden version of the Hocotate ship, you'll see a nice sofa and a TV. The TV's screen is actually animated, but because of the way the game renders transparency (and because of the angle of the television), you can't see this in-game. By using a free camera mode to place the camera inside of the cockpit's glass, and aiming at the television screen, you can see the animation: the screen pulsates between a dull gray and a strong cyan color.

A single rogue one-sided untextured triangle is floating under the dirty plate in both the normal and Piklopedia version of the Awakening Wood.

Found in /user/Kando/ufo/ufo.arc is a model for the S.S. Dolphin from Pikmin labelled ufo.bmd. This model comes with an animation ufo.bck, showing parts on the ship moving.

All lighting files can be found in /user/Abe/cave.

Probably used for the Hole of Beasts at some point in development. (Jyoou means "Queen".)

"Sirohana" translates as "white flower", so it's a safe bet that these files were once intended for the White Flower Garden. 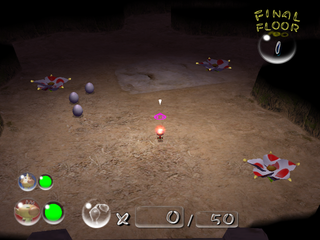 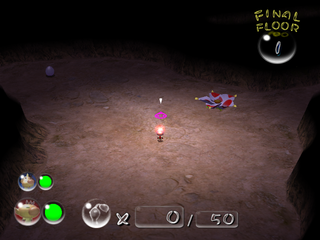 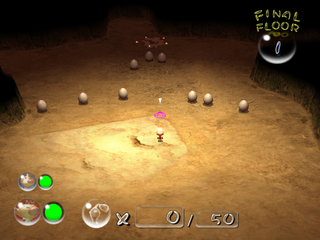 key_light_lv0
This is a slightly brighter version of the lighting used in the Snack Pit challenge level. 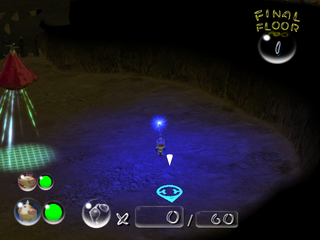 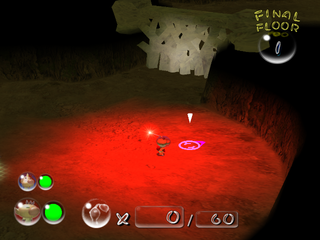 light_blue and light_red
These lighting files use an earlier format than the others, so the only way to get these to work right is to import the RGB and light settings into a different file. It's possible that these settings were meant for Olimar and Louie, who would light the caves with their tracking beacons. Or they could just be test files. 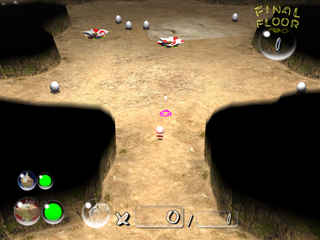 bluefog00
This lighting file has the version code "0000" rather than "0001" which almost every cave light uses. 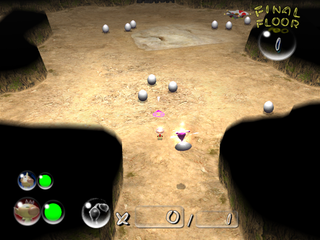 hiroba_light
This lighting file also has the version code "0000" and is almost the same as "bluefog00" but slightly darker.

Turning the code on will replace all menu options with "Main Game" ( starts the "demo" ) and 2-Player Challenge Mode ( crashes Dolphin ). All Pikmin colors are near their respective Onions/Ship, caves cannot be entered, the BGM is broken, and the HUD is gone. 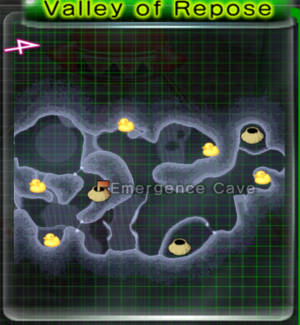 Enemies and some other objects have properties that control how much damage a Purple Pikmin stomp causes (default is 50), their stun chance (default is 30%), and stun duration (default is 5 seconds). For various reasons, some of these values are unused:

The following enemies leave corpses and are only found in caves, leaving these seed values unused.

Some cave configurations contain cave units and objects that can never be picked. 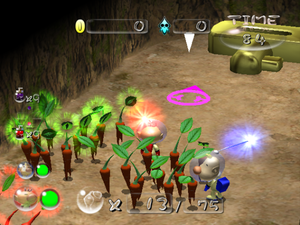 The Challenge Mode caves have data for the starting number of Pikmin, with a 6th unseen one for Bulbmin. There's also a number for a 7th type, and by giving yourself Pikmin of this type, you'll be given Pikpik carrots. They aren't very animated articulation-wise, and they float a bit above ground. Their stems always have a leaf on top, even if a bud, flower, or spicy glow overlaps it; it also glows green when idle, like Bulbmin. They act, react, and sound like any other non-Bulbmin Pikmin, and have no special attributes or defenses. Finally, on the HUD, their "standby Pikmin" icon doesn't exist, and they get skipped over when calculating the closest Pikmin.

The developers likely made the carrots a Pikmin type in order to reuse code in the Piklopedia (where you can throw pikpik carrots at the enemy in each entry.) Making them count as Pikmin would let the enemy AIs use their regular behavior to hunt and eat the carrots, rather than requiring additional logic.

Located within the English messages file message\mesRes_eng\pikmin2.bmg is a handful of unused messages.

This text is stored with the Piklopedia and Treasure Log template text.

These messages were seen in early versions of the game on the treasure collection screen.

This message hints that at one point, Olimar was meant to be alone, as the day would end immediately should a single leader lose all his health.

Text for the unused Onion cutscenes.

Text for the camera cutscene.

The European version of the game has 5 languages: English, Italian, French, Spanish, and German. There is also an empty subfolder in /new_screen named hol, likely a remnant of a Dutch translation. There is also a file in /message named msgRes_hol.szs which only has the progressive scan and 50/60Hz mode screens translated. It also had the "AquickbrownFoxJumpsoverthelazy" test string from the English version.

Hidden in the ISO, along with some standard error messages, are these odd strings:

If the game crashes, you can input a button sequence to make a crash handler show up: A, B, X, R, L, D-pad left, D-pad down, D-pad up, D-pad right, Z. You should input it slowly to make sure you get it.

Since the game itself is frozen due to the crash, the handler will draw directly into the framebuffer, which makes the entire thing slow and choppy. When it opens, it starts auto-scrolling line by line, and when it reaches the bottom, the player can take control. D-pad up and D-pad down scroll up and down, A goes to the end, and B goes to the start.

The first few lines contain some information about what went wrong. The rest of the report consists of information about the type of error, and the state of some important addresses. Because the map file included in the game files has been overwritten with garbage at some point during development, most of the address decoding simply returns "no information".

The following Gecko codes also make the error handler show up right away without any button sequence.

Totaka's song appears in two different places in this game:

Of note is that the memory card version can also play in the unused save question screen, since it plays the same song.