Rayman was initially planned to be an SNES title, but the rise of more powerful consoles meant development shifted to those despite this version allegedly approaching completion.

One of the more interesting differences between the SNES prototype and the final game is Rayman's design. 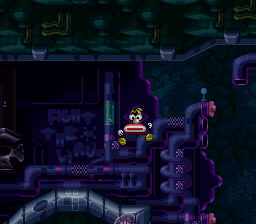 Lightning orbs, which are not seen at any point because no items are placed in the level.

Rayman can only charge up his punch in this build and can't actually fire it, leaving these graphics unused.

An enemy is loaded into the level, but it's not seen at any point.