The Multiplayer portion of the game has a lot of unused strings. Some are leftovers from the original Modern Warfare, while others are from when the game supported dedicated servers during development. 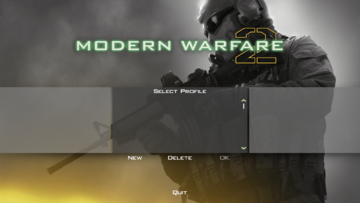 Profiles were a feature present in the original Modern Warfare, which allowed the player to store multiple saves on one computer. However, this was one of the many other features that were axed during the game's development. This feature was likely scrapped late in the game's development as these menus look like the final game's menus. While its menus and localized strings are present in the game's files, the scripts they relied on are not.

In the game files, there a bunch of sounds for an unused killstreak named "Little Bird". By switching the game's languages, you can access the voices recorded in a different language.

The following is code mentioning this killstreak.

All that remains of this killstreak are strings.

Like the Predator Airdrop, all that remains of this killstreak are strings.

Like the Super Airstrike and Predator Airdrop, all that remains of this killstreak are strings.

Like the killstreaks above, all that remains of this one are strings. Like the Little Bird, there is some code that references this as well.

Below is a table of strings used by this killstreak.

Like the killstreaks above, all that remains of this one are strings. Judging from these strings, it is possible that you would have been able to take control of a helicopter that isn't the Chopper Gunner.

In the game's files, there is a music file for the "Tactical Nuke" killstreak, most likely intended for when someone uses it. The sound file is an excerpt from the music track when the player kills General Shepherd at the end of the game.

In the game's files, there are a few .bik files that are not used in the actual game.

An untextured model that barely resembles an actual vehicle is present in the game's files. Likely meant for testing purposes. 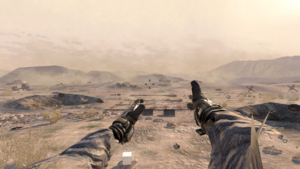 As an attempt to show the model, the FOV has been increased.

The Default Weapon is present in almost every Call of Duty game to date, sometimes with different variants but most of the time it's relatively the same. This game's version of the Default Weapon is no exception. It lacks sound effects, proper textures, proper sights, and a reloading animation.

Below is a table of strings (attachments included) used by this weapon.

Only the following localized strings remain.

While there is a map that is used by the game that is similar to this one, the level "All Ghillied Up" from the original Modern Warfare is still present but the mission is not. You spawn wielding no weapon but you can obtain the M1014 by attempting to switch weapons. The map lacks a proper compass map, some models don't have their textures, and the radiation that should kill you doesn't exist. The level can be accessed using console commands or modding.

Interestingly, co_hunted, a map from the original Modern Warfare is still in the final release build. It's possible to load a half finished mission that uses it. Your objective is to run from the helicopter crash site to the bridge as quickly as possible. Upon reaching the bridge, your controls either freeze, or a grey window appears that asks you to "Return To Special Ops". If you run out of time, it blows up and you fail the mission.

The mission would later be refined in the final game as the Special Ops mission Overwatch with significant differences, such as no allied forces at the beginning and the mission ending at the barn rather than the gas station. This version requires two players to play, one player would protect the other by attacking enemy forces with an AC-130.

Below is a video which demonstrates the unused mission.

A special version of the Singleplayer gametype. You are given 5 lives, and your task is to get as many points as possible while playing the campaign with a 20 minute time limit. When you run out of lives, the game is over. Although most of the gametype is functional, getting a game over does not work as intended. Accessible using console commands or modding. Below is a video which demonstrates the gamemode.

Very similar to Search and Destroy. No respawning, first team to win four rounds wins. The objective of the game mode is to kill all the opposing team's players. When only one player on each team is left standing, a flag spawns in a random location. If the flag is brought back to a team's respective side, they win. Even if one of the last two players alive kills the other, the flag must still be captured in order to win the round. Accessible using console commands or modding.

At Defcon 5, the game progresses as normal. At Defcon 4, each player goes into Last Stand before death. At Defcon 3, every weapon deals more damage. At Defcon 2, all killstreaks take one less kill to obtain. At Defcon 1, all players are eliminated from one round when killed. If after a minute one side has not won at Defcon 1, a Nuke detonates, and the games ends as a draw. Files called "[faction]_1mc_defcon_[1-5]_01.wav" can be found, and there are also the announcer sound files for the player's team saying Defcon 5 all the way to Defcon 1. Accessible using console commands or modding.

In Die Hard, everyone is given the Last Stand park and teammates in Last Stand are marked with a green cross on the minimap. This game mode has a variant of almost every game mode such as Die Hard Team Deathmatch, Die Hard Domination, and so on.

Global Thermonuclear War is very similar to the Sabotage game mode, except the objective is to guard a tactical nuke from the enemy team until the time runs out. It appears to have been scrapped late in development, as it's fully functional and can be played using console commands or modding. Plus, Strategy guide shows pictures of a game of Global Thermonuclear War.

One Flag Capture the Flag

Capture the Flag, except one team has to defend a flag while the other team have to grab the flag and bring it back to their side. Accessible using console commands or modding.

Capture the Flag, but your team is instead protecting a randomly selected player.

When you open the Game Rules menu for it in a private match, these are the following options:

There are multiple attachments that were scrapped from the multiplayer part of the game due to reasons related to balance. Only a few localized strings are what remains of those attachments.

This feature would have likely allowed users to create their own custom gamemodes and use them in private matches. Unfortunately, all that remains of this feature are a few localized strings.

A bunch of unused perks can be found in the game's files. While some were cut due to balancing, others were made into deathstreaks.

It appears that during its early stages of development, the game used an in-game mailing system. The following localized strings are what remain in the game files. A similar idea was used with the daily and weekly orders in Call of Duty: WW2, where the player can complete challenges (such as getting a number of kills on a set playlist), in return for a supply drop or bonus XP.

It appears that along with this mailing system, it would be possible to earn one of three lottery tickets, being either a regular ticket, a super ticket, or a mega ticket.

Getting a Tactical Nuke from a Care Package 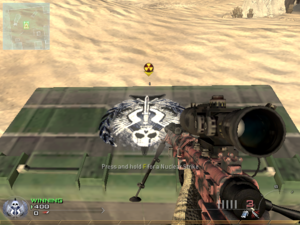 Imagine getting this during your first time playing the multiplayer.

The following string is left unused because of this. 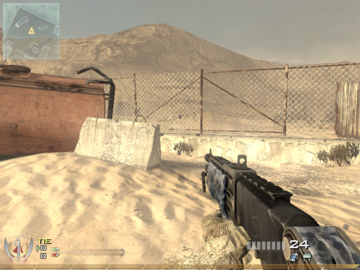 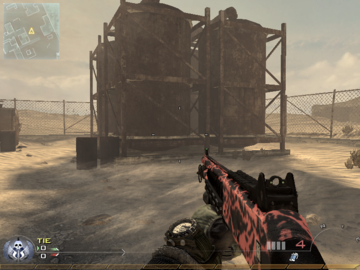 The following weapons support this feature:

Hidden within the game's menus is a level selection screen, which bears a striking resemblance to the original Modern Warfare's UI. It allows you to access any level in the singleplayer campaign. Most level options in this menu contain the names of developers who are assumed to have been assigned to work on it. There are two ways to access this menu. The first method is to type /developer 1 into the developer console and clicking on the new "Game Levels" option. The second method is to type /openmenu levels_game into the developer console, which will bring you directly to the menu.

Designer/Scripter Alexander Roycewicz hid his name in a couple of maps he worked on. These can be hard to find as these are flat brown letters floating in the air and are in locations where the player normally can't go.

The mission, "No Russian" was subject to changes in a few regions. If you kill a civilian in the Japanese and German releases, you fail the mission. To add to this, the Russian release of the game doesn't even have the mission at all.

The Japanese version of the mission was by far the most affected. The poor translation accuracy ended up having an effect on Makarov's infamous line. As a result, there was a lot of backlash towards the Japanese publisher Square Enix.

The icon used for an unlocked item differs between the English and the non-English versions of the game. It is likely that to save the trouble of translating the word "new" to different languages, the developers just changed the picture to a picture of an unlocked lock.

The update was released on December 11, 2009. This update did several things, including:

On October 8, 2012, Activision temporarily pulled the Favela map after getting several complaints from offended Muslim players because on the Favela map, there is a room in one of the buildings with 2 paintings. The picture's frames contained foreign text that read "Allah is beautiful and He loves beauty". The problem with this was that the painting was placed in a bathroom and as a result many found this location choice to be very disrespectful.

After solving the problem, the map returned on October 23, 2012 without the offensive content.