NBA Jam Tournament Edition even got a 32X port, with the typical better graphics than its Genesis counterpart, but same sound quality.

The same four unused players in the SNES version exist in this version as well, and can be accessed with one of the below codes, where xx is the ID of the desired player:

Aside from Worthy, none of them have portraits, and the in-game appearances and stats of Tyler, Howard, the A.C. Green duplicate and Rozier is that of DJ Jazzy Jeff. The Fischbach character uses Carol Blazejowski's head in-game, but has its own stats (despite them being identical to the other secret players'). James Worthy is the most complete of the unused players, with his own stats and in-game appearance.

The following messages from Steve Snake, the game's programmer, can be found in the ROM. 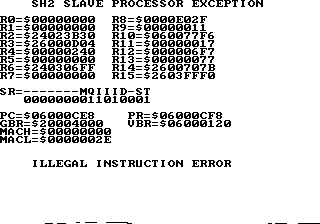 If the game ever crashes, it'll display this exception handler.