Resident Evil: The Umbrella Chronicles is an on-rail shooting game for the Wii (and later ported to the PS3) co-developed by Capcom and Cavia that depicts the events leading to the downfall of the Umbrella Corporation. In other words, an excuse for Capcom to re-use characters and locations from previous Resident Evil games.

A model of the zombified Edward Dewey from Resident Evil Zero. Could have appeared in the "Train Derailment" chapter, but goes unused. 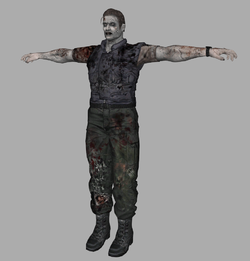 Another unused enemy from Zero, listed as ELU0.arc. It was eventually used in The Darkside Chronicles.

An unused model of the "Suspended" enemy creature from Resident Evil: Outbreak is stored inside the chara directory, listed as ESP1.arc. The Suspended itself is never encountered during the game, but the place where it appears in Outbreak, the Apple Inn, is featured in Umbrella Chronicles. This model is probably a leftover, since Umbrella Chronicles recycles assets from the Outbreak titles during the "Raccoon's Destruction" chapters. 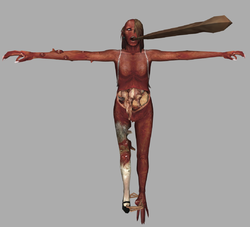 Among the audio files in the "sound" directory there is an unused track listed as 34_Leon.brstm. Curiously, the song that plays in Albert Wesker's "Beginnings" chapters is listed as 34_Leon_retake.brstm in the files.

A portion of unused text in the mes_en.txtres file, located in the message directory, suggests that the game was going to feature an additional chapter based on Resident Evil 2. The aforementioned unused track was most likely related to this chapter.