A port to Sega Saturn of the original PlayStation version of Resident Evil, known as Bio Hazard in Japan. It is the first port the game received, beating the PC version to it by three weeks, and was also released before the Director's Cut re-release on PlayStation. This version adds some exclusive extra content that was never ported to another version (including Battle Game, the precursor mode to the fan favourite The Mercenaries: Operation Mad Jackal), and also has its share of differences with the original release.

This text, in English even in the Japanese version, is the intro to the Battle Game. It is the first Battle mini-game in the series, predating Extreme Battle in Resident Evil 2: DualShock Version and The Mercenaries: Operation Mad Jackal in Resident Evil 3: Nemesis. It is unlocked after finishing the game once, or with the help of a cheat code. 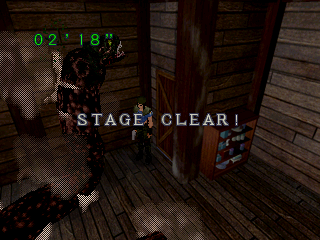 The Battle Game consists of 15 rooms, including 3 safe rooms. The player must kill all the enemies in a room before the game automatically proceeds to the next room, all while a new up-beat music plays, and is given the liberty to manage his inventory at the start of the game and in safe rooms along the way.
The enemies present in each room and their placement are reminiscent of the rooms' equivalent in the main game but there are differences, such as a zombie Wesker and a golden Tyrant exclusive to this mode. Also, Hunters can be found in the Underground rather than the Ticks from the main game.

Jill Valentine and Chris Redfield are both playable, with or without their alternate costumes. The weaponry and supplies at the disposition of the player differ depending on the character chosen.

After disposing of the golden Tyrant boss, the camera zooms-in and rotates around the protagonist while a new music plays. 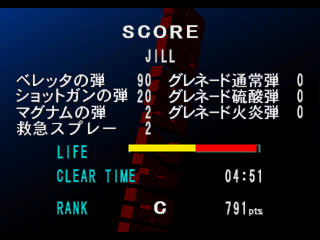 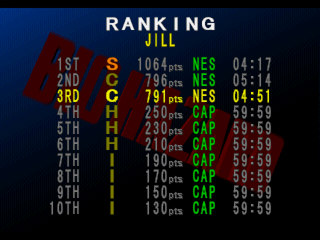 At the end of the mini-game, the player is given a ranking from J to S and a score depending on time spent, health status, and supplies remaining. Scores can be recorded onto the console's back-up memory or on a memory cart. Each character has his own high score table, achieving an S rank as Chris can prove quite challenging, especially in the international versions of the game.
In the background of the ranking and score screens, a 3D "BIO HAZARD" logo exclusive to this version rotates. The same logo is used after the main game's credit rolls, although the colour differs.

The Tick is a new enemy which replaces the Hunter in the Underground area, although Hunters are still present in the Mansion. Ticks are very much based on Hunters but differ in several ways: the model looks different, most notably they have a protusion on their backs, their texture is in the brown colour ranges, and they have different sounds. More importantly: Ticks have a new decapitation move.

While Hunters only perform their decapitation move when they're at mid to long range from the protagonist, Ticks do it at close range. This makes the move more likely to be used by the enemy, and it also makes it faster, which makes it harder to dodge. Just like for the Hunters', they will only perform the move if the protagonist has less than half of its maximum HP left. 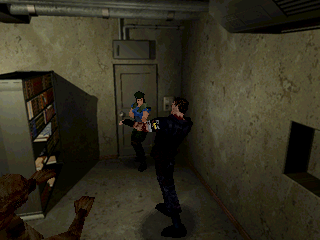 A zombified version of Wesker which only appears in the Battle Game exclusive to this version. He has more HP than a regular zombie: it takes 4-5 Magnum Rounds to dispose of him. 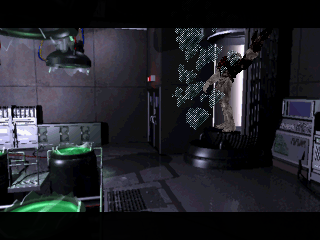 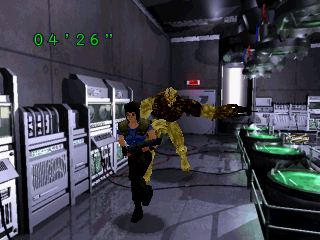 The golden Tyrant is the boss of the Battle Game. It has more HP than the regular Tyrant.

Each protagonist is given a new alternate costume exclusive to this version, on top of the one they already had in the original PlayStation version.
These costumes must be unlocked and are accessible the same way as the others, acting as a reward for acquiring the best endings in each protagonist's scenario. Although, new to this version, a cheat code allows to start a new game wearing them.

Looking at the data of the January 15, 1996 prototype of the original PlayStation game reveals that the developers had intended to make a second alternate costume for each protagonist. Indeed, in the original PlayStation version, there are two triggers to change costume in the dressing room, both of which lead to the same one. Each subsequent port of the game to another system fills this gap with their own costumes.

The Saturn version has two cheat codes which allow to use the unlockable exclusive content:

In the original PlayStation version when the player shoots the arm off a zombie, a puddle of blood appears on the ground, but the arm is missing. Similarly, when Jill kicks a zombie head, the head disappears once it has ended its course. In the prototype versions of the game, both the arm and the head could be seen on the ground: they were taken out for the original PlayStation release but restored in the Saturn version. However it is worth noting that only the Japanese NTSC-J Saturn version has this uncensored, the NTSC-U and PAL releases don't.

In the original PlayStation version, when dying the screen fades to white very quickly, not leaving any time to see how enemies behave. In the Saturn version there is a longer delay before the screen fades to white. All deaths are affected and in the case of zombies, it is possible to see them feast on the corpse of the protagonist, something that could not be seen in the PlayStation version.

In the North American NTSC-U Saturn version, it takes as much time as in the Japanese NTSC-J version before the screen fades to white. However, zombies just stand in place instead of feasting on the corpse of the protagonist.

In the Saturn version, the kill scene of Plant-42 lasts longer. Chris's lower body part first falls to the ground, then his upper body does. In the original PlayStation version, neither body part falls down.

The sign next to the storeroom door was changed to "ARMS" in the Saturn version.

In the next room, the sign next to the switch is gone in the Saturn version and the cabinet on the left is opened.

In the Saturn version:

In the PlayStation version, only certain parts of the crow enemy is textured, while in the Saturn version its entire body is. The crow is the only enemy which looks did not change between the August 4, 1995 prototype and the final PlayStation versions.

The Sun Crest, the Small Key located in the shed, Dormitory room key 003 and the Small Key located in the basement of the Dormitory are all invisible in the PlayStation version but visible in the Saturn version. Looking at the data of the PlayStation version reveals that the textures of those items' 3D models are present in the rooms' data, which means that they were intended to be visible (as a counter example no texture data exists for the Ink Ribbon and the ammunition hidden in the small 2F east office).

In the PlayStation version, when Rebecca Chambers is playable in the Dormitory, items that were picked up when playing as her in the Mansion are still in her inventory. In the Saturn version, except for the Beretta, her inventory is empty at that point. Presumably this was changed to un-clutter her inventory for the V-Jolt puzzle which requires picking up at least 3 items. However, a glitch allows to retrieve some of her lost items.

When comparing the Japanese PlayStation and Saturn versions: two of the three gameplay demos which play when waiting at the title screen differ slightly.