The hit PlayStation game makes its way to a whopping 512Mbit cartridge!

While this version does not include the extra content found in the Windows port or the Dual Shock Version PlayStation re-release (such as the Extreme Battle Mode or the harder difficulty setting), it has its own extra content which was never ported to another version such as new alternate costumes which replace the original ones and an Item Randomizer mode. 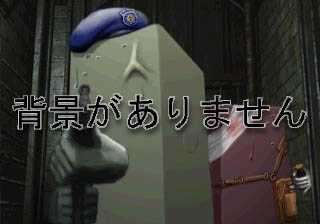 Present in all versions, and located before the background images, is this copy of the "To-fu Survivor" minigame title screen with "There's no background." written over the top in Japanese.

There are a few unused background images which are not present in the Windows and PlayStation versions. 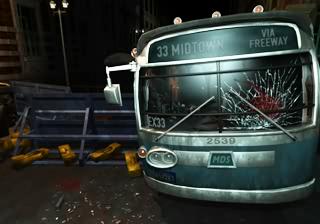 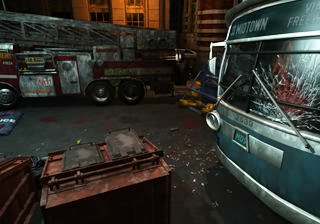 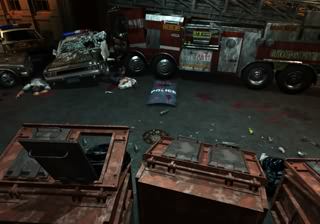 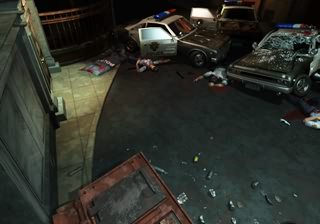 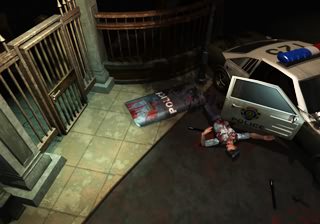 An early version of the street leading to the entrance of the police station, different from the one present in the October 31, 1997 PlayStation prototype version. 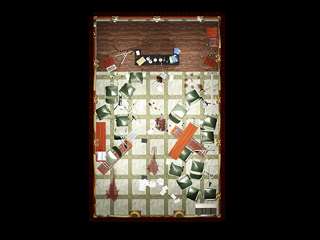 A top down view of the conference room. It seems to be the version of the room found in the demo versions rather than the final one.

Present at 0x12150 in the ROM are some compression-related strings.

Present at 0x800B7FF0 in memory are strings related to other image types.

The messages which appear at the end of the intros in other versions of the game, just before gameplay starts, are missing in the Nintendo 64 version.

The Nintendo 64 version shows only one version of the video, in which Annette is talking with Claire Redfield and the action takes place on the second floor, which does not correspond to either original version. Therefore, the voice of Claire Redfield can be heard instead of Ada's in Leon's scenario, and in Claire's scenario the action takes place on the wrong floor.

During the FMV cutscene near the start of scenario B, in other versions, including the original PlayStation's, you can see Leon or Claire walking onto the heliport and looking upward at the start of the video. This was taken out in the Nintendo 64 version.

Certain camera angles and character movements were changed in the Nintendo 64 version for the Leon A ending cutscene compared to the original PlayStation version and other versions of the game, such as Claire tilting her head when talking about her brother. The segments of the video which originally only play in the Leon A ending are gone, instead the Nintendo 64 version re-uses parts of the Claire A ending.

The second credit music, Credit Line Of Whole Staff, which plays at the end of the B scenarios in other versions of the game including the original PlayStation's, has been omitted. Instead Credit Line Music, the track used for the credits at the end of the A scenarios, is re-used. This is presumably because the track is embedded in the Staff Roll FMV in the PlayStation version, which wouldn't have been feasible to include in this port.

When the player achieves the best rank (A or S depending on region) in a B scenario, he is rewarded with both the S.Machine Gun and the Gatling. However, on Nintendo 64 the reward screen only shows the Gatling, despite both weapons being indeed earnt. It is possible that the developers got rid of this version of the screen, only keeping the equivalent for individual rewards, to save cartridge space.

Someone behind the development of the port must have been either feeling sick with blue because a lot of graphics have been saturated with a blue tint in them or even redrawn in the color altogether.

These two screens which belong respectively to the intros of the Claire B and Leon B scenarios are in light shades of brown in other versions. 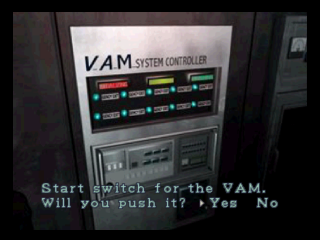 Most of the in-game text is blue, while it is white in other versions. Only the text in files is unaffected. 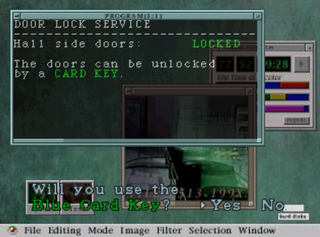 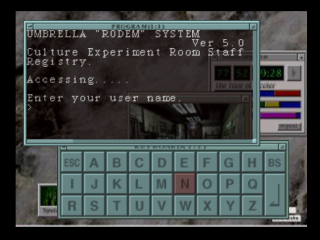 The red and blue color channels were (mistakenly?) swapped in the ending rank art screens, giving them a prominent blue tint.

If you didn't already encounter Brad Vickers, then at the very end of the scenario B ending you'll get a bonus image telling you how to find him. In the PlayStation version it explains who he is and how to find him, but in the Nintendo 64 version the first screen is missing so it only tells how to find him. The screen also has a case of the blue.

In what is perhaps the most seemingly deliberate and baffling graphical change in the port, the color for the beret and body of both Tofu have been swapped.

Similarly to the blue sickness, the non selected text on the title screen appears with the wrong colour. 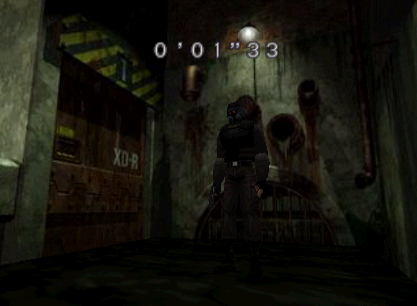 After completing either of the B scenarios and saving the game, the player is able to start a new game with this mode.
Some supplies pick-ups, namely Herbs, First Aid Sprays and ammunition for most weapons, are semi-randomized. Although the item placements remain the same, the player may find a First Aid Spray instead of 9mm bullets, etc. The amount of ammo of each pick-up is also semi-random: for instance a single Grenade Rounds pick-up may hold the original 6 number of grenades, or it may have 15 or even 30 grenades. Generally speaking, the player is very likely to end up with more supplies than during a regular playthrough.

Some items are not affected by the randomizer:

When starting a new game, the player is asked to chose a "violence" setting between Low, Medium and High. What it does is allow to censor the game: the "high" setting more or less corresponds to how things are in the original PlayStation game (see below), while with the "Low" setting all blood is gone except for the puddle that spawn below enemies' corpses when they die. The "Low" setting also disables dismemberment: among other things, zombies can not lose their arms anymore, neither can they be decapitated, including with the shotgun: a headshot with the shotgun has no visual impact.

By default it is set to "Low".

In the original PlayStation versions, when zombies are killed a certain way (headshots, grenades, rockets, etc.), blood appears on their clothes, as seen in this screenshot with the back of the zombie with the yellow shirt. In the Nintendo 64 version, the textures remain the same. This feature is also missing in the PC and Dreamcast versions.

The backgrounds are natively in JPEG format in the Nintendo 64 version, as seen also in the development text provided above.

(Source: Megan Grass for the background image and some information.)

If using the Memory Expansion Pak, polygon models and textures are of higher quality and resolution compared to the PlayStation version.

With it, the game switches between many different internal resolutions, at least five different ones, depending on the room, the camera angle, and whether or not there are many 3D models on the screen or in the room. Within the same room, the resolution can change several times at camera angle changes. If there are enemies in the room, after killing them and coming back to the empty room, a higher resolution is usually used. Note however that the highest possible resolution is not always used, even in rooms completely devoid of enemies.

In comparison to the standard PlayStation and Nintendo 64 versions, the resolution differences seen in the latter with the Expansion Pak installed range from subtle to, in some cases, significant. No higher resolution source backgrounds are used with the Expansion Pak as none exist, the 320*224 backgrounds — which are already slightly vertically cropped from the original 320*240 backgrounds — already take up almost a third of the cartridge space. Instead, they are upscaled internally, which as of consequence also makes them further cropped and stretched. 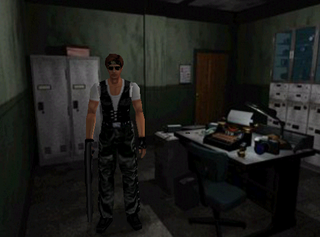 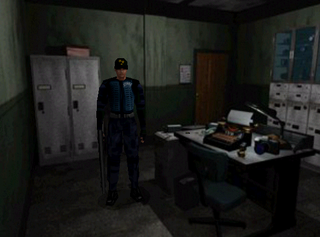 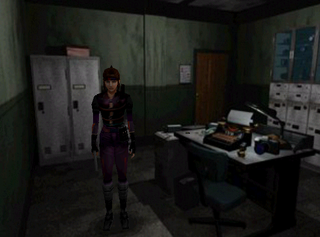 New costumes that replace the ones present in other versions. Claire still gets a Colt SAA with hers. Interestingly, only one of Leon's alternate costumes in this port features the faster sideways pistol aim, instead of both of them like in other versions. He can also pretend to be a S.T.A.R.S. member with his second costume.

The logo of Angel Studios, the developer of this port, is on the back of Claire's alternate costume.

The Nintendo 64 version added several cheat codes not present in the original PlayStation version, although the PlayStation Dual Shock Version and the Windows versions did also have an infinite ammunition cheat which behave differently.
These cheat codes must be entered on the load menu. If entered correctly, the player will be sent back to the title screen.

Note that by default when accessed through cheat codes, the two mini-games will use blue blood and the low violence setting, whereas if played via a saved file, they use the settings of that file.