Resident Evil 2 marks Leon and Claire's first appearances. It's also the game that made Resident Evil a household name, prompting Capcom to mercilessly port the game to numerous platforms, such as Windows and Nintendo 64.

Within the XA voice directory of the Japanese trial edition lies unused dialogue, including two individual samples of a screaming Leon and Claire, an outtake of Leon's voice actor, and dialogue for Leon and Marvin, the black police officer who dies early in the "A" scenario game.

Other unheard dialogue can also be found in the Beta 2 prototype, including short lines from Ada and Leon.

Resident Evil 2 has a lot of unused items that were leftover during its development cycle, notably from a prototype version commonly known as Resident Evil 1.5.

This green, unknown handgun exists in the final game, but doesn't seem to have any function and can't be used. It is likely used as a placeholder graphic for unfinished inventory avatars. The gun itself seems to be based on the SIGPRO S228, as the name of the weapon exists in an item list that is in the Japanese version of the Resident Evil 2 Demo. This placeholder image is also in Resident Evil 3: Nemesis, which also has a usable weapon similar to this one: the SIGPRO SP2009.

For an unknown reason, Flamethrower Fuel is unobtainable. It can be restored through hacking.

Like the Flamethrower Fuel, the Spark Shot ammo went unused and unobtainable. It can also be restored via hacking.

Both items, ID 24 and 25, were meant for Claire Redfield's scenario. Although unused, they are both functional and can be used with the help of cheat codes. Up to 6 Grenade Rounds can be converted into Flame Rounds by combining them with one Chemical FR-W09, or into Acid Rounds using Chemical AC-W24.

An early state of this mechanic exists in the demo versions of the game, but on top of that in those versions it is also possible to combine both chemicals together, which results in Recovery Chemical, an item not present in the final.

A similar mechanic will later be used in Resident Evil 3: Nemesis, in which it is possible to combine various types of Gunpowder with Grenade Rounds to convert them into Acid, Flame and Freeze Rounds. Note that Chemical FR-W09 is also in the data of that game, unused.

This Calico M950 is usable in the original version of the game and in some of the re-releases by using external cheat codes. The above footage is from the original Japanese PlayStation release.
The weapon is usable by giving the Colt S.A.A. to Leon, hinting that it was likely an extra weapon for Leon since Claire obtains the Colt S.A.A. in the locker with her extra costume.
The weapon is unfinished: the firing animation is the same as Leon's Hand Gun, it makes the same sound as the Colt S.A.A. and it does not damage enemies. A fan made mod for the PC version can make it usable in a finished state.

It would have used 9mm Hand Gun ammunition with a 50 or 100 rounds capacity.

The weapon is also in the demo, which is where these two inventory images were taken from as they did not survive for the final version, and the 10/31/97 prototype version in which it is also usable though similarly unfinished, the only differences being that it makes no sound and that it has infinite ammunition, further hinting at the weapon being intended as a bonus weapon. The ID number of the item in those versions correspond to that of the Colt S.A.A. in the final, presumably the Colt S.A.A. replaced the Calico M950, as there is no evidence of the Colt S.A.A. existing in the prototype versions either.

These two images exist in the final game but are unused. While hacking the weapon back into the game using external cheat codes is possible, it crashes the game when equipping it as the model for the weapon no longer exists. The weapon would have used two inventory slots. Mods for the PC version allow it to be usable.

The weapon can be seen in the Resident Evil 1.5 prototype version, and still exists in some form in the final version as it is used by Umbrella's Security Service in the cutscene in which they retrieve the virus from William Birkin. It was likely replaced by the game's actual S. Machine Gun: the MAC11, which would explain why that weapon can be retrieved from the corpse of one of the Umbrella Security Service members in the Laboratory B4 Culture Room.

Compared to the international versions, the Japanese version has some differences which generally makes it easier:

The max HP is the same in both versions: 200. The base damage dealt by enemies is also the same in both versions. However, the Japanese version has a leniancy system: if the character's HP value is 50% or less of the max, damage dealt by enemies is reduced by 33%. In other words: if the character's status reads Caution or Danger, a zombie's bite deals 20 damage rather than 30. This mechanic is not present in the international versions in which a zombie's bite always deals 30 damage.

Seven months after the release of the original versions, Capcom released a revised version of Resident Evil 2 that added support for the force feedback and analog controls of the then newly-released Dual Shock controller (a similar revision of the first game was also released around the same period). This version also featured other content not found in the original version. Unlike the other Dual Shock version, the music was (thankfully) untouched.

The title screen was changed accordingly.

Furthermore, it is now possible to turn on/off auto-aiming by simply pressing Start while on that screen, rather than having to use a cheat code to turn it off like in the original Japanese version. The only exception of this is when playing the Arrange Mode using the U.S.A. Version difficulty, in which case auto-aiming is turned off and can not be enabled, despite it being possible in both the original and Dual Shock NTSC-U versions.
The international versions kept the same system it has in the original release: only control Type C has auto-aiming on.

This second game mode is new to the Dual Shock version. 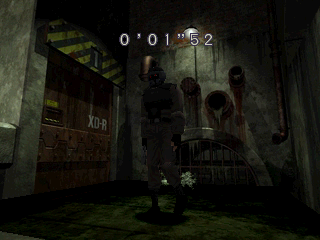 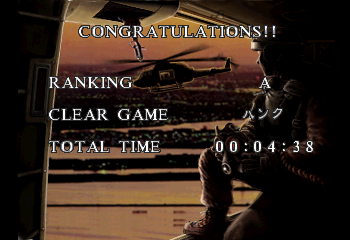 The "4th Survivor" and "To-fu Survivor" minigames now have a time display on top of the screen (similarly to the countdown display used during certain portions of the main game or to the Battle Game of the Saturn version of Resident Evil), as well as a result screen for each with new artwork. The player is graded based on how fast they clear the minigame. Note that save-files for these two modes are cross compatible with the non Dual Shock version of the game.