The 2019 Resident Evil 2 is the long-awaited remake of the original 1998 game. It was built under the RE Engine, the same engine used in Resident Evil 7.

Almost all of the NPCs in Resident Evil 2 have unique grunts and voices for being played as. Using a Trainer or cheat engine this can be seen. It should be noted that not all of the NPCs are playable in the Ghost Survivor, leaving these voices unused. Some but not all of these characters have facial animations as well. The following characters that have playable data that are not used are Marvin, Annette, Irons, and Ben. Prior to the Ghost Survivors update, Robert Kendo also had unused playable data. As for the others that would be eventually featured in Ghost Survivors, they would crash the game when their data was selected.

Tyrant has a number of unused animations in RE2. Some are relatively minor, such as a few gimmick animations that involve him performing movements like vaulting over a low wall (possibly the window in the observation room that the licker breaks through?), though he never enters any areas that might have him use an animation like this.

As documented below, Tyrant also has a complete set of animations for reacting to the Spark Shot, which ends in him going down to one knee regardless of how much damage has been dealt to him previously.

Additionally, Tyrant has an animation for a secondary grab attack, unlike the one he typically uses, which is split into five animations (initial grab, killing the player, and reacting to the flash grenade, HE grenade, and knife sub-weapons respectively).

Tyrant's secondary grab attack is all in one animation, he has no animations present for reacting to sub-weapons or the player otherwise being able to escape from this secondary grab, and judging from the animation itself the grab would be an instant kill like his usual one.

Using the Spark Shot against Tyrant

The Tyrant has an interesting, fully programmed response to the Spark Shot. In a normal game, by the time you can obtain the Spark Shot as Claire the Tyrant no longer spawns, as he is killed in an earlier cutscene.

If shot anywhere aside from the head, he plays a unique and unused animation, and the cables that connect the weapon to the needles snap immediately, a behavior that isn't seen anywhere else apart from shooting the gun at something that isn't an enemy.

If shot in the head, and the bars are filled completely, Tyrant immediately falls to one knee but gets back up just as quickly, disregarding the usual 30 seconds worth of breathing room a player gets when downing him in any other way. A second dosage of volts seems to put him down for the usual amount of time, though.

It should be noted that this is only unused in the main game. This animation is actually used in "The Tofu Survivor" and "The Ghost Survivor" if one plays as Flan or Ghost and uses the Spark Shot on the Tyrant that appears in the RPD or NEST respectively.

The Early Orphange is in the Bedroom map for the Orphanage. It is somewhat extensive, including an early version of the bedroom, a closet, and a laundry room. The area is partially finished, including some lighting and textures. All of the stage props, such as plushies or cabinets, have no textures at all. The collision is iffy, none of the stage props have collision except for a blockade in the bedroom, the stairs have strange collision, acting more as a slope then stairs. It is missing some rooms, indicating this would have multiple maps. 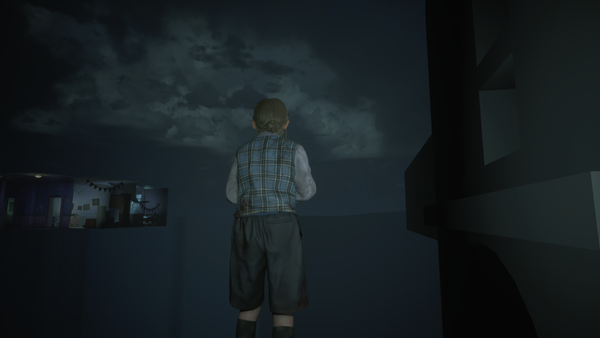