Resident Evil 3: Nemesis is the last mainline Resident Evil game released for the original PlayStation, although it's actually a half-prequel/half-sequel to Resident Evil 2 that was repurposed from a spinoff project after the game that was originally planned to be part 3 ended up becoming part 4 (before it became its own IP). Jill Valentine must survive the zombie outbreak of Raccoon City as she makes her last escape... 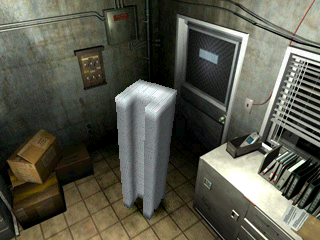 Originally a hidden character in Resident Evil 2, Tofu's model was included in this game but goes unused. It may have been used by the developers for testing the collision detection as it was in Resident Evil 2. It can be accessed with the GameShark code 800D1F86 0000000F. 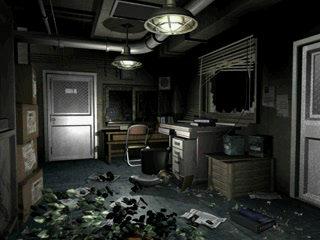 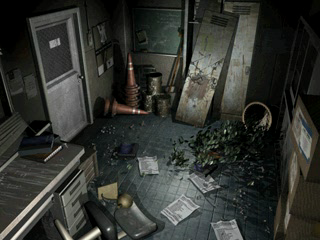 In the parking garage where the power cable for the cable car is located, there is an unused version of the save room next door. To see it, you need to use a walk through walls code to walk through the door leading to the save room instead of opening it normally. The room appears totally trashed as if hit by an earthquake and the typewriter and item box are both missing. This version of the room was most likely intended for after the garage is trashed by the presence of the Grave Digger. 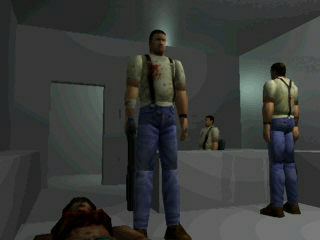 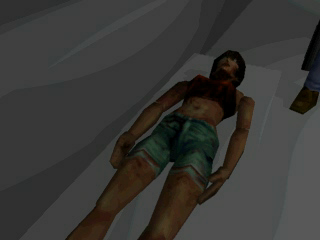 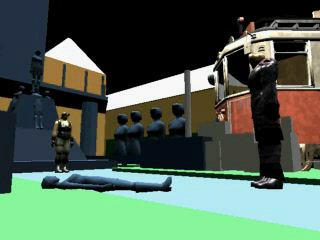 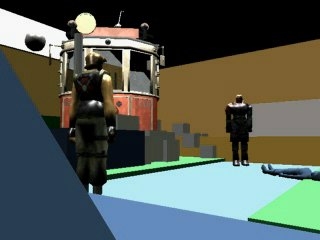 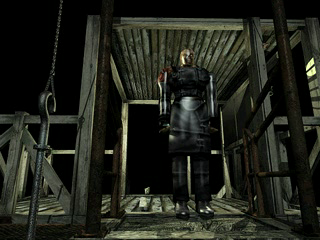 From the bridge connecting the City Park to the Dead Factory.

An earlier version of the first slide in OMBGJ.dat. The text is significantly different from the version used in the game.

Jill's face, the colour of her shirt, as well as several details in the background were improved compared to the unused earlier version. 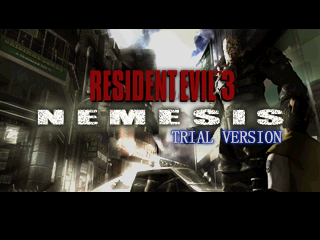 A leftover title screen background from the trial version. 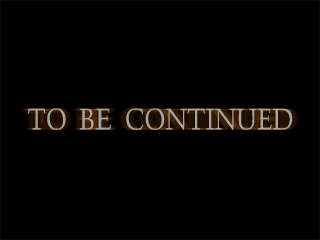 Used for when the player either completes the demo or gets a game over. 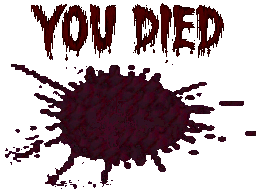 The "You Died" text from the demo version. 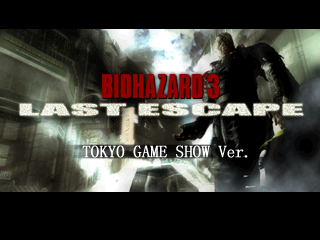 The title screen from the build of the game shown at Tokyo Game Show '99. 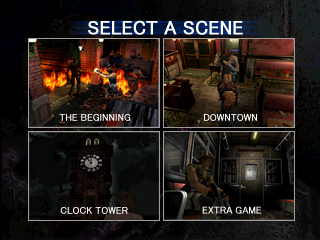 The stage select from the Tokyo Game Show build.

Several graphics are found unused within the final game and in the Biohazard 3 Trial Version. While they have full descriptions in the latter, the final version of the game has the descriptions cut out and only displaying 没/botsu in the Japanese version (romanized to "BOTU" in the English version), which means "rejected/discarded" for the item name and description when examined.

This graphic is unused in the final game. It is the same graphic used in Resident Evil 2. It was more likely used as a placeholder for the item description graphics.

These three coins are unused in-game and their use is unknown. They all depict a demon of some sort. They are possibly an early version of the Amber, Obsidian and Crystal balls, the number of items and their colours do match.

While the Fire Hose is used in-game, it was more likely that it would have been found somewhere else, broken, as the end adapter is missing from it, and the player had to likely find this piece and combine it into the final Fire Hose that is used in-game. Reason for this decision is unknown, but likely to lessen the amount of back tracking in-game to find the items. If hacked into the game, the items can be combined into the Fire Hose and be used as normal.

The Broken Fire Hose can be used on the Fire Hydrant in the alleyway where the fire is blocking access to the Sales Office, though it displays "Non message" when used, and does nothing. It is possible this was a placeholder message to be added, before it was decided to scrap the idea of finding the adapter for the Broken Fire Hose and allow the player to obtain the already completed one in the final game.

The Remote Control is used in the final game at the Sales Office, but was likely originally to be an item. The player likely had to find and replace the missing batteries for it to be used like in the final game. When hacked into the game, the remote without the batteries can be combined with the batteries and be made into the normal remote control but has no function whatsoever.

The function of this item is unknown, but was more likely to be used in place of the Mixed Oil, and found at the Gas Station.

The chain was likely to be used for a puzzle, but no information can be found on what it does. It was found in the Warehouse as shown in this background that is not used in the final game. It is in the box that holds Handgun Ammo in Hard Mode. 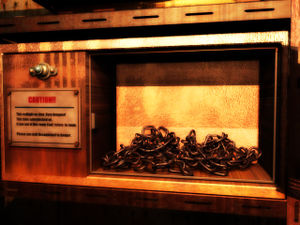 This is one of the few items that isn't labeled as BOTU. Its inventory graphic has a "HH" next to the image, which its meaning is unknown. It is labeled as Game Instruction A and has no description when examined. This item is also unused in Resident Evil 2, in which it is called Chemical FR-W09 and can be combined with Grenade Rounds to convert them into Flame Rounds. Therefore, it may be an early version of the Gunpowder, although attempting to combine it with Grenade Rounds or Gunpowder gives no result in this game.

This item doesn't have an inventory graphic and when it is in the inventory, it cannot be moved to the Item Box. Its use is unknown, and was likely used at the later half of the game after the Clock Tower.

This is the only other item that isn't labeled as 没/BOTU in both versions, being called the 開発用キー/Kaihatsuyou Key in the Japanese version (literally "Key for development") and "Dummy Key" in the English version. The item has an actual description in the Japanese version, whereas in the English version it simply says "Dummy". The graphic used is the same as the Spade Key from Resident Evil 2. The Yamanouchi mentioned in the description is likely a reference to effect programmer Takaaki Yamanouchi. 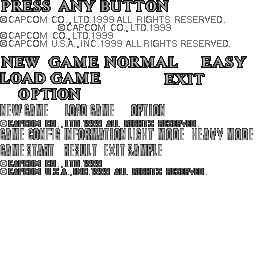 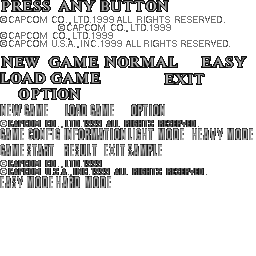 The graphical files used for title screen and menus text. On the left the Japanese version, on the right the NTSC-U version.

Several bits of text are unused: there are bigger, probably older, variant for most of the title screen texts. Note that the difficulty settings are called NORMAL and EASY in that version. PRESS ANY BUTTON is also unused.

Early versions of Jill Valentine's 3D models are in the game's data, with unfinished textures. The files are dated 2-3 weeks before the final ones.

On top of the title name being different, the entire background differs and was improved in the international version.

This video advertisement for Dino Crisis, another survival horror by Capcom, plays when selecting "INFORMATION" in the Japanese versions. The video is not present in the game data of the international versions.

The background art for Leon S. Kennedy's and Claire Redfield's epilogue screens were improved for the international version. 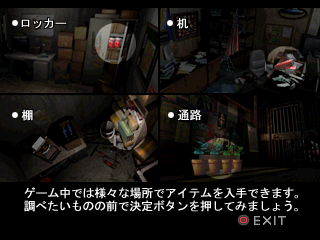 A tutorial on how to pick up items. In the Japanese versions this tutorial appears when starting a new game in "Light Mode". No such tutorial is present in the international versions and no translated version of the screen exists in the game's data.

There are two Japanese PlayStation versions: Version 1.0 and Version 1.1. Version 1.1 would become the base of every subsequent port. Version 1.1 fixed a few things:

Screenshot of the PC version provided so the easter egg can be seen better thanks to the high resolution background.

Two posters of Dino Crisis can be seen briefly during a cutscene. The poster on the left is an advertisement with the release date of the game, and the one next to it corresponds to the background of the congratulations screen at the end of the game. Dino Crisis and Resident Evil 3: Nemesis have a lot in common: both are survival horror games developed and published by Capcom and first released on PlayStation in 1999, two-three months apart. Many developers, both on the developing and publishing sides, worked on both games.

The two games also share another easter egg: the developers in the two games would often detail parts of the backgrounds (signs, posters, etc) by filling them with non-sensical text, as the texts can't be read in the PlayStation versions due to the low resolution. However, the texts are revealed when playing the higher resolution PC versions. In the lobby of the newspaper office in Resident Evil 3: Nemesis, the sign on the control pannel of the shutter reads:

A reference to McFarlane Toys, a company which did make action figures based on the Resident Evil series. The very same text can also be read on the sign next to the door of the antenna control room in Dino Crisis.

Both games also have a similar "fake-out" involving the main enemies and helicopters in FMV cutscenes, mid way through the games, which reference the ending of the first Resident Evil.

Screenshots of the PC version provided so the easter egg can be seen better thanks to the high resolution background.

The word YUKI can be read on a poster in the alley as well as on a sign in the garage. It is the first name of one of the background designers, presumably signing his work.