Ahh, Resident Evil. The game that spawned several sequels, a remake and numerous other media, including a load of less than desirable movies. The game has some amazing graphics for the time, but it relies heavily on fixed camera angles that made up for some fairly pretty pre-rendered backgrounds. Also inventory management. A fair bit of it.

Alternate bullets for the Colt Python magnum. Though the game describes them as more powerful, they actually do less damage than the standard .357 magnum rounds. They can only be used in the original game through hacking and were removed entirely for the Director's Cut version. They are use-able in the January 31 1996 prototype, while in that version regular Magnum Rounds deal less damage than they do in the final.

Much like in the sequel, fuel for the flamethrower is hidden in the game's coding but goes unused. It is use-able in the January 31 1996 prototype and, in that version, can be found in the Underground area in Chris' scenario.

Removed from the final game for unknown reasons. Interestingly, when attempting to use this item a prompt will appear on-screen giving you the choice of yes/no instead of the default "this item cannot be used" message though nothing seems to happen with either choice. Has a black inventory graphic but a full 3D model when examined.

An orange can of oil with a flame graphic on the front. Its intended use is unknown.

This item is given to the player in the storyline but never used in-game outside of cutscenes. Features a glitchy inventory graphic.

An image of a makeshift lock pick can be found in the inventory graphics of the 1996 release. While Jill does receive a lock pick from Barry early on (and uses it throughout the game), it is never actually shown anywhere in the game.

In the January 31 1996 prototype version, the lock pick is an actual inventory item using this icon, this system is re-used in Resident Evil 3: Nemesis.

A similar design is used for Claire's lock pick in Resident Evil 2, and is visible in her status screen as a "personal item" from the beginning of the game.

The GameCube remake uses a different, "professional" design for the lock pick instead.

The background image for a file that isn't found in-game. It is however present in the ReBirth Mode of the Nintendo DS version of the game, Resident Evil: Deadly Silence, in which the letter entitled "Eric's Letter" hints at the location of Doom Book 1 in this mode. Looking at the data of the Trial Edition of the game reveals that this image was originally intended for one of the scrapped Trevor's letters.

The background image for an unknown file. Presumably also meant for one of the scrapped Trevor's letters or Spencer's Invitation for Trevor. 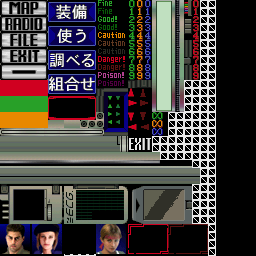 A "Good!" health condition is present in the graphical file for the status screen. This condition is never used in-game, instead both the green and yellow status indicate "Fine".

The following voice acting can be found in the game's data but remains unused in any version of the game.

It looks like a cutscene for Chris' scenario during which he could meet Rebecca in the third laboratory engine room was planned, possibly with a variant if she was hurt. This scene would have foreshadowed the triggering system, something which arguably does lack foreshadowing. It is worth noting that vents can be seen all over the laboratory, including in the first engine room, which is presumably what Rebecca is referring to. The concept of having the protagonist's partner flee through draft holes will later be re-used in Resident Evil 2, its earliest execution seen in the earliest available build for that game.
More unused voice acting can be found in the PC ports of the game.

These are the build dates for different completion builds of the original 1996 release found in the CAPCOM.INF file. They can also be seen by inserting the game disc in any disc drive on your computer, and simply seeing the "last modified" date on the SLPS_002.22 file or such equivalent.

The Resident Evil series is known as Biohazard in Japan, although the title in this first entry was spelled as two words.

All three gameplay demos which play when waiting at the title screen are shorter in the North American version than they are in the Japanese version, and two of them play out differently.

Bio Hazard contains a few lines of English text. When the game was localized, it was given a new variable-width font. However, they didn't take advantage of this for the lines of text that was originally in English as those retained their original formatting.

The Japanese version includes background images for all files with gray-colored text over them. The international versions lack these images and have just white text on a black background and only includes the images for the Pass Number, Barry's Photo, and the Pass Codes.

The international versions have an adjusted difficulty.

Some of the more gruesome scenes were censored in the international versions. The shot of Chris Redfield smoking during the cast roll call was censored with footage of him from the intro overlaid on him just standing there. The cast roll in the initial Japanese release also had a completely different song, "ICY GAZE" performed by the J-pop artist Fumitaka Fuchigami. This was replaced with a new song for the international versions called "Terror" which doesn't feature any lyrics. All later versions of the game including the Japanese releases would use "Terror."

The Japanese version of the original release also has a vocal ending theme during the credits, "Yume de Owarasenai"/"I Won't Let This End As a Dream", also by Fumitaka Fuchigami. This was replaced with a new song for the international versions​ called "Still Dawn" which doesn't feature any lyrics. All later versions of the game including the Japanese releases would use "Still Dawn."

Most of the changes listed above would be reverted in the Deadly Silence DS remake..

The color of the trademark symbol was changed to be the same as the title name. The Resident Evil versions use the red trademark but its placement differs.

On the last page of the V-Jolt Report, a character and its spacing was changed on the first line.

The dates of all the executable files in the PROG2 sub-folder, in which most of the game's code is located, differ. When comparing the files of the two versions with a hex editor some of them vary quite a bit, though at this point it is unknown if it makes any difference in-game. With the files pertaining to the title screen and to the V-Jolt Report, it is the only files that differ from the original release.

Resident Evil: Director's Cut is a revised version of the game that was released in late 1997 to fill-in for the postponed release of Resident Evil 2. The subtitle is a bit of a misnomer, since it doesn't really restore any missing content (such as the George Trevor letters, which eventually were implemented into the 2002 remake). Nevertheless, it does feature a slew of new content and notable changes from the original releases.

The art gallery clues were rewritten in order to make the solution easier to understand.

Likewise, the quite confusing pool table puzzle in the guard house outright tells you the code at the end of the table in the Director's Cut.

Resident Evil: Director's Cut: Dual Shock Version, if it wasn't apparent by its ridiculously long title, is a revised edition of Resident Evil: Director's Cut (making it a revision of a revision) released in late-1998 that adds support for the newly-released at the time DualShock analog controller (a similar revision of Resident Evil 2 was released around the same period, despite the original version of that game being only a few months old). It features the following other changes as well:

This is the version that is available on the North American PlayStation Store.

The Dual Shock Version has a "Gore Warning" screen which appears at the start of the game in between the publisher logo and the title screen. This warning screen wasn't present in the previous releases, Resident Evil: Director's Cut included, and would become a staple in the series. Other survival horror games like Dino Crisis or Silent Hill would also include a warning screen.

Resident Evil had a staggering number of different releases on the PlayStation alone. Japan, North America, the UK, France and Germany all got bespoke versions of the 1996 original and the 1997 Director's Cut, topped off with Dual Shock versions for Japan and North America. Among the multitude of releases, various FMV cutscenes were censored or edited for content, sometimes deliberately and sometimes (apparently) because of localization mix-ups. Music was changed as well, for various reasons. This section attempts to explain, in a comprehensive manner, the numerous FMV differences between all PlayStation versions of Resident Evil.

It is worth noting that no single version of Resident Evil (on the PlayStation, at least) contains totally uncut and uncensored FMV, though the original Japanese versions come the closest. With the exception of the opening prologue (which is uncut, but still mildly censored), Bio Hazard, Biohazard: Director's Cut and Biohazard: Director's Cut: Dual Shock Edition all contain uncut and uncensored FMV cutscenes.

Cutscenes in all versions of the game contain spoken English dialogue, which was never dubbed for non-English-speaking regions. (The game uses softcoded subtitles for this purpose instead.)

This is the opening prologue of the game, filmed in color throughout, and depicts simulated (but graphic) blood and gore. It's followed by a cast roll, during which Chris Redfield smokes a cigarette, and ends on a title card (Bio Hazard or Resident Evil). The prologue's uncut length is 3 minutes and 47 seconds. This file was changed the most often among all PlayStation releases of the game; counting music differences and the two title cards, there are no less than six different versions of the prologue.

Inexplicably, among all twelve PlayStation versions of Bio Hazard and Resident Evil, the opening prologue is uncut and unaltered only in the French and German releases of the Director's Cut.

The three Japanese releases are all uncut (runtime: 3:47), but show the cinematic portion in black and white. The original Bio Hazard prologue replaces the original BGM with licensed music that the developers were obliged to use.

All other versions of the prologue are in black and white for the cinematic, edited for violence (runtime: 3:30), and censor Chris' smoking (rather clumsily) during the cast roll. The two Dual Shock versions (JP and NA) of the prologue contain a new orchestral score, meaning that all three PlayStation releases of Bio Hazard have differing soundtracks for this cutscene.

This is a short, 15-second cutscene triggered when the player approaches the first zombie of the game. The full cutscene depicts the severed head of Kenneth, another S.T.A.R.S. member, falling to the floor and rolling towards the camera.

This is the worst ending for Chris' storyline (the "lone survivor" ending), which runs 59 seconds. In all three Japanese versions, this cutscene depicts Chris removing a pack of cigarettes from his pocket and lighting one up.

Instead of edits or censoring, the overseas versions of this scene contain alternate footage of an exhausted Chris staring into the distance (runtime: 44 seconds). Once again, the JP and NA Dual Shock versions contain a new orchestral score during this cutscene, which extends their lengths by ten seconds each (1:09 and 0:54, respectively).

The credit sequences differ significantly between the various versions of the game. That being said, the original 1996 Bio Hazard has the most unique set of credits FMVs.