RollerCoaster World allows you to do what it says on the box: make roller coasters! 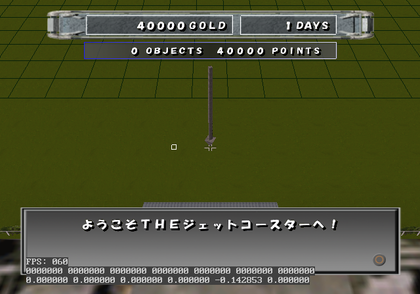 Enabling the below code will display an FPS counter along with other unknown information.

These sounds don't play in-game, and are most likely from earlier in development. Interestingly enough, these sounds were used in an earlier verson of this game by Bimboosoft, Coaster Works for the Sega Dreamcast.

Probably intended for the options menu. Why the track was removed is unknown.

Could have been another track for another menu related to your park.

From a file in the Japanese version of the game, called JD3.ELF. While there are folders on the disc labeled "JD1" and "JD2", there isn't a folder for "JD3" in both regions. The ELF file was removed when the game was localized for Europe, but why this file was on the disc in the first place is a mystery.

The Japanese loading screen consists of a few standard warnings about eye strain, seizures, and the importance of taking regular breaks, along with a disclaimer that real-world rollercoasters may not behave in exactly the same way as the ones in the game.

In the European version, this was replaced with an image and the word "Loading...".

Both games have a different save file icon when seen in the Browser.

The Japanese version has an image for the menu screen, but when the game was localized for Europe the image was removed and instead uses actual data from a pre-made park seen in the intro screen. The park is also running, but all it does is have a Camera rotate around the Coaster. The European version also does not mention Bimboosoft, instead mentioning TAKARA Co.