Use the following code to display "DEBUG". Selecting it will go to a black screen, though.

Three major versions of Street Sk8er are known to exist: 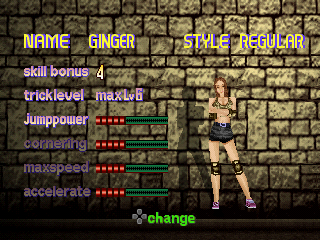 Each version of the game has a nearly completely different soundtrack. While the original Japanese release consists of only original tracks, both the localizations and the Simple re-release feature several licenses sprinkled in as well. Additionally, some of the tracks in the American/European releases are much louder compared to the Japanese releases.