Part of the Simple 1500 series of budget games, The Pro Wrestling is the game that built the foundation of WWF SmackDown!, albeit without the World Wrestling Federation license, instead opting for original wrestlers based on Japanese wrestling legends.

It also has the body part fatigue indicator, which was not introduced to the official WWE games until WWE SmackDown!: Here Comes The Pain many years later. 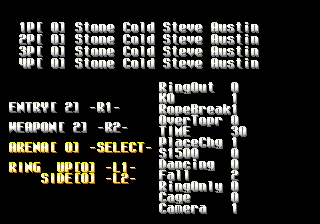 Use the following code to display the debug menu after D3 Publisher logo. 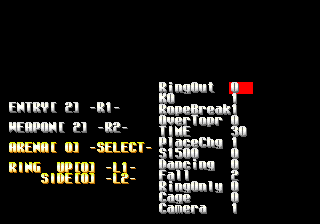 Press Start to edit some parameters; if Start has not been pressed, use the D-Pad on the respective controller to select a character. The character list includes all of superstars included in the first SmackDown! game, including Create-A-Superstar parts-only characters such as Mideon and Stevie Richards, as well as removed wrestlers Jeff Jarrett (in slot 29), Meat (in slot 38) and Droz (in slot 39); the IDs here are the same as ones in the SmackDown! prototype, further confirming that the game was indeed based on an early build of WWF SmackDown!. Some names are also misspelled. 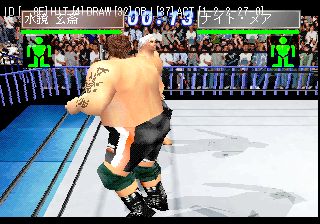 Use the following code to display some debug values on the top of the screen (different from ones in the SmackDown! prototype): 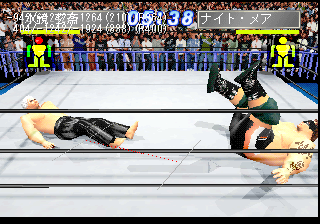 Use the following code to display the coordinates (on the top on the screen) and the direction line (in red) for each wrestler:

The extensionless DMY, when read as an .STR video file, reveals itself to be a tutorial video from Evil Zone, also developed by Yuke's. It can also be found in WWF SmackDown! and WWF SmackDown! 2: Know Your Role.