WWF WrestleMania: Steel Cage Challenge is the third World Wrestling Federation game released for the NES. Notable for being the first WWF game on home consoles to feature a Cage Match option. 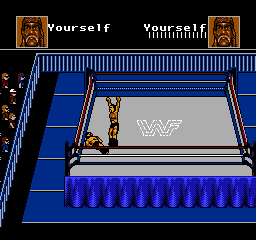 Before the values for all of the regular wrestlers is an unused character named "Yourself". The previous NES WWF game, WrestleMania Challenge, did feature a character like this, suggesting that a similar character was planned for Steel Cage Challenge.

The character has black hair, a mustache, and black ring attire. His portrait is Hulk Hogan's, and his pre- and post-match announcements are glitched versions of Hogan's.

Use one of the following Pro Action Replay (PAR) codes to play as Yourself (US version only):