WWF Raw is the third World Wrestling Federation game released for the Sega Genesis and the final one based on the WWF Super WrestleMania engine. 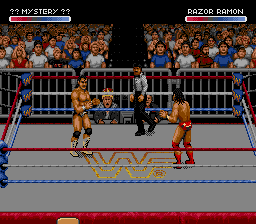 Much like with the SNES and Sega 32X versions of the game, there is a character modifier value for a wrestler named ??Mystery??. He seems to be a placeholder for a 13th wrestler who was never implemented (possibly Kwang, who was added in the Sega 32X version of the game).

Unlike the SNES and 32X versions, where the character resembles Shawn Michaels, ??Mystery's?? sprites in this version are borrowed from Razor Ramon, but the palette used gives him black trunks with gray designs and gray boots. When performing certain moves, his sprites change to Bret Hart's. He also lacks a finishing move and a biography on the wrestler selection screen. The Genesis version of this character comes with a major flaw; he cannot pin the opponent. Pressing the button command to do so will result in the game hanging. The character therefore can only win by countout or by submission in a brawl match. When ??Mystery?? wins a match, the game simply plays the theme music and Titantron video of the wrestler who was chosen on the character select menu.

Use one of the following codes to play as ??Mystery?? (US version only). The codes take effect after all characters have been chosen.

(Gens/GS: remove the 00 to the right of the colon before applying) 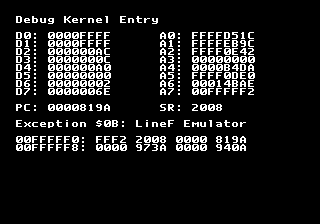 On a MC68000 error, the game simply hangs; the code to do this is at $72782. However, at $72788 (which is immediately after the code to hang the game) is code to draw a somewhat detailed error screen. You can enable this screen with both 72784:4E71 and 72786:4E71. On Gens/GS, you can use Ctrl+Backspace to swap the current instruction word's bytes, which usually results in a crash, to demonstrate the screen.