WWF Raw is the first World Wrestling Federation game released for the 32X and it has an exclusive hidden character, Kwang. 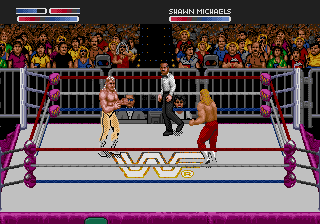 Much like the SNES and Genesis versions of the game, an unused wrestler can be found using a character modifier code. In the 32X version of the game, the character has no actual name, as where it would be is made up of graphics from the health meter. The character uses Shawn Michaels' model except with yellow tights, lighter skin and white hair. When performing certain moves, the sprites change to Razor Ramon with no color pallete. This character has no special moves. When winning a match, the game will use the picture and theme music of the wrestler chosen before the match.

Use one of the following codes to play as this character. The codes take effect after all characters have been chosen.

(Gens/GS: remove the 00 to the right of the colon before applying)