This page details one or more prototype versions of WWF SmackDown! 2: Know Your Role. 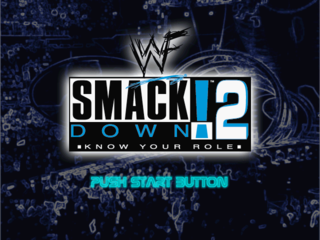 A prototype of WWF SmackDown! 2: Know Your Role, dated August 11, 2000 (the day the game was announced to the public, coincidentally), was released as part of Hidden Palace's Project Deluge. This build is roughly similar to those used on some IGN pre-release videos of the game.

Infamously, Ken Shamrock and The Big Show were dummied out of the final game. In this prototype both wrestlers are fully implemented alongside the others. 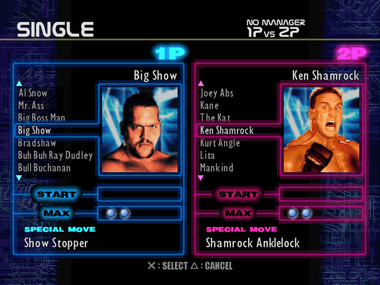 Shawn Michaels, Mick Foley, Cactus Jack, Steven Richards and Debra are missing, although Debra has her upper part as an original CAW part. The spots where their select portraits would be located at are instead occupied by generic male "Create-A-Superstar" icons as placeholders.

Many wrestlers are featured with earlier gimmicks such as Prince Albert (different name), The Kat (black hair) and Bull Buchanan (his SWAT gimmick as Big Boss Man's stablemate). A number of other wrestlers are also still in their outfits from the first game, such as The Godfather (still a pimp) and The Undertaker (Ministry of Darkness); Big Show and Ken Shamrock also have their attires from the previous game.

Perry Saturn and Eddie Guerrero also have their earlier lower parts (and head in case of Eddie's), which are unlockable "Create-A-Superstar" parts in the final game.

Most of the character select portraits in the prototype are different from in the final. A good amount of these are taken from pictures used for loading screens. Note that these may not represent the currently used outfit in-game: Lita's portrait depicts her with her Essa Rios manager-era gear, although her in-game gear is the Team Xtreme one. The reverse is the case with The Undertaker, who has his American Badass portrait but still uses his Ministry-era model from the first game, as mentioned above. Pete Gas and Joey Abs also have their portraits appearing to be cut off on the sides.

The rest of the portraits were mostly the same as in the final game, but with different coloring. The portraits below are listed by internal order.

While Season Mode is disabled in this build, the show cards from the first game are in the game's data, unused, with two TV shows (Raw is War and SmackDown!) and the "Big Five" PPVs (using 1999 event logos, with exception of King of the Ring which uses the 1998 one, and Survivor Series which uses the promotional poster logo while the final game uses the branding from the actual 1999 event); this change is also reflected in ring mats and aprons.

This also means that the house show card is also leftover in the game, which was removed in the final SmackDown! 2 due to changes to Season Mode.

Match text from the first game is also present within this prototype's data.

Big Show and Rikishi both have unused loading screens. Rikishi's was removed since he was already featured in the Too Cool loading screen (although the picture used for it is in the final as a sign in "Create-A-Superstar" mode), and Big Show's would be removed completely.

These placeholder images showing the Yuke's office were listed alongside the loading screens. These are not used in-game.

Almost all of the default title holders were changed from the prototype to the final version: