Your Pain is Here!

WWE SmackDown!: Here Comes The Pain is the fifth game in the SmackDown! series and the second game in the series to be based on the Ruthless Aggression era, and the last to be named after only one WWE show post brand extension. It is also the only SmackDown! game with a subtitle that isn't a catchphrase of The Rock.

Several wrestlers were scrapped for various reasons yet their individual character slots remain on the game. Ultimate Warrior and Hulk Hogan are by far the most complete wrestlers with all of their character data still intact minus their models and for Hogan any entrance music and titantron. For wrestlers other than Warrior and Hogan, all that remains of them is their names, nicknames, ring names, superstar points, heights, weight-classes, gender, season availability, empty entrance and select picture slots and for most, their move-sets. None of the deleted wrestlers can be played, except for Al Snow, as they will freeze the game since their models do not exist on the game. Reportedly, trying to play as these removed wrestlers runs the risk of ruining your current season. 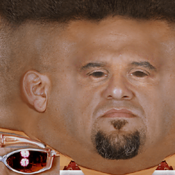 In Tazz's character slot there exists a blank blood texture for him. It is possible that Tazz was originally going to have matches alongside the player in the game's season mode, similar to Jerry Lawler.

There is a list of CAW call names located in moves.pac/move/list.pac in the file 0008.dat. This file contains the names of all wrestlers and backstage WWE personnel (ie. Jerry Lawler, Jim Ross, Jonathan Coachman etc.) in the game in addition to recycled call names from WWE SmackDown! Shut Your Mouth (i.e. African Superstar, Flying Man, Vampire, Wild Thing etc.). A similar list also existed in Shut Your Mouth in moves.pac/move/list.pac in the file 0004.dat for the purposes of containing text versions of the call names. Given that this file was updated for the this game's roster, it is possible that earlier in development, CAW call names were going to included. Interestingly, the call names that were included in the Shut Your Mouth file for wrestlers who did make the Shut Your Mouth roster (Boss Man, Deacon Bautista, Jacqueline etc.) are not found in the HCTP file.

The game's executable contains some strings pertaining to removed features.

There are a series of strings that list the menu text for different match types starting at 0x357520 in the game's executable file (all addresses are for US version of the game). Among these strings are entries for King of the Ring (including Single Tournament and Special Tournament used by it), I Quit and Street Fight match types, all of which were present from Shut Your Mouth but missing in Here Comes The Pain.

King of the Ring was removed likely because the namesake PPV was replaced by Bad Blood that year (interestingly, assets for that arena appears last), while Street Fights were removed because they were basically Hardcore matches restricted to the arena. Ironically, there was an I Quit match in 2003 at that year's No Mercy PPV that wrote off Stephanie McMahon from WWE television, but it happened outside of the game's storyline period.

There are further unused strings indicating a cut game mechanic involving medicine. The strings "You can buy medicine" and "Meditation Room" are located in the file where the different strings for moving around backstage in Season Mode are located 0x359758. Given that this game was not developed by a native English speaking developer, there are numerous spelling mistakes in the strings located in this file. It is likely that the Meditation Room was supposed to be the "Medication Room". Possibly, damage sustained in matches would need to be healed up through buying medicine in the medication room. A similar game mechanic would return in WWE SmackDown vs. Raw 2011, where players would heal up after matches by visiting with a doctor.

There are more unused strings located where the AI behavior options are defined (such as weapon use, attack the referee and diving moves) starting at 0x3591D8. Here, there appear to be unused behavior options for how an AI controlled CAW behaves when they are on the apron in a tag match. The strings indicate that players would have been able to choose whether their CAW would "Touch (Tag)" (allowing a wrestler to reach out for a tag) or "Wait in the Wings (Tag)" (not reaching out for a tag whilst on the apron).

There are unused strings for "Commentary Volume" and "In-Game Music Track" where the other option toggle strings are located (BGM Volume, SFX Volume, Vibration, etc.) at 0x357E80. Both these options are unavailable in the final game, but there does exist later builds of Here Comes The Pain containing commentary where these strings may have been used.

Some of these options can also be seen in the game's official strategy guide book.

Messages pertaining to the passwords for custom wrestlers found in the previous game can also be found here at 0x35EEC0, although menu panel strings for the feature have been completely removed.

There exist two unused selection pictures in the game.

The following icons and screen remain unused in the game.

Unused Background Music Jingles
These jingles are found in BGM000.afs, and only exist for 5 out of the 16 songs that are used for background music in this game. The one jingle not included is used on the celebratory screen after winning a Royal Rumble match in exhibition mode. Maybe one of the five jingles was meant to randomly play after winning a Royal Rumble match, but only one was used in the final game.

Unused Music Jingles
These jingles are found in PBP000.afs, and are not used anywhere in the game, but they sound like they are from the same hard-rock techno genre as the actual in-game background music.

There are two unused 3D models in the 9900.pac and 9901.pac slots in the CH2.pac directory. Both of these models are referenced in the game's executable just before the splash screen.

They appear to be a templates for the 3d models of the characters.

Several wrestlers have unused attires that remain on the disc but are not usable in normal play without modding. These attires can be enabled through the use of mod tools such as PAC Editor.

There exist many unused arena and backstage variants on the disc but are not usable in normal play without modding.

There are a total of 29 build dates in the executable, 25 of which are unique.