Know your role and shut your mouth, jabroni! 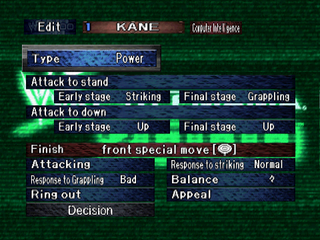 A normally unselectable Computer Intelligence mode can be accessed using GameShark code D1095184 2000 801709E5 0004. In the regular Edit Mode, select any wrestler and press Z on the main character editing screen. The selection will become bigger and blink slower. Press A to enter it. From here, you can change around any wrestler's AI settings in detail. It should be noted that Virtual Pro-Wrestling 2, which is based on WrestleMania 2000, has this available in its Edit mode.

If you leave this menu, the normal option will appear underneath the "Fighting Style" option until you exit the wrestler's edit menu.

There are two choices under this category; Early Stage and Final Stage. Both options have a choice of Striking, Grappling, and Flying.

There are also "Early Stage" and "Final Stage" choices here, but the options are different. You can choose from Striking, Submission, Flying, and Up.

This gives you a choice of moves from the wrestler's movelist that you can choose from, presumably as a finishing move. If you try to edit anyone that's not a Create-A-Wrestler, it gives you the "Not Able to Edit" message, but this is more in reference to editing the wrestler's moves than choosing a different finisher for them.

This section has a choice of five options, but most of the options are blank, except the middle one with what looks to be a stray Japanese character. Further testing shows that this function determines how often the computer player strikes or grapples.

This brings a list of three choices; Good, Normal, and Bad.

This also brings up a list of three choices; Good, Normal, and Bad.

The choices list here determine the computer player's balance between attacking and defending.

There is a choice of five different options here, but every single one of them are blank. These choices determine how the opponent will act if they're outside the ring.

There is a choice of three different options here, but again, all of them are blank. These set of choices determine how often the computer will taunt.

The Godfather's Hos only accompany him in this game. They became unlockable in WWF No Mercy. To save them into a character slot:

This can also be done with the Dummy character. It uses a male 3D model, but is considered female by the game and cannot be edited. To save it, repeat the above steps with GameShark code 8109EFF0 0A09 8109EFF8 0008.

Both have simple movesets, no entrance music or video, etc. Through normal play, these models can only be used in matches by cloning a female wrestler to a creation slot, then selecting them as outfits.

In addition to the Hos and the dummy, some other wrestlers were mentioned in the game's ROM data, but did not make the final cut at all.

The ROM still has graphics for the WCW logo, nWo logo, and nWo championship belt, among others, presumably left over from WCW/nWo Revenge. The following GameShark codes will replace the "RAW is WAR" apron textures with the respective unused texture:

In the Japanese version, the unlockable wrestlers are already available.