The Pro Wrestling 2 is the sequel to The Pro Wrestling, where it can no longer deny its links to WWF SmackDown! 2: Know Your Role anymore, thanks to one of the songs in this game having the same lyrics as with SmackDown! 2's Create-A-Superstar menu music and the timer, pin/ringout counter, and end-of-match messages (albeit with inverted palette) being exactly the same with the World Wrestling Federation licensed game.

It also features a deathmatch mode that would make FMW or ECW proud, right down to fire deathmatches that would made Kane proud for his inferno matches.

A build date, located in E0A70, similar to what WWF SmackDown! has. This indicates the game was built six months after the Japanese version of that game, and two weeks before the American release of SmackDown! 2. It is worth noting that neither the first The Pro Wrestling game nor SmackDown! 2 have build dates in the RAM. 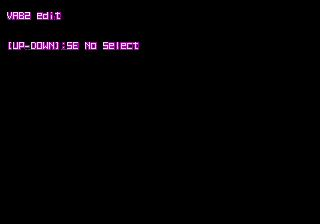 Use the following code to display a VAB sound test after the "Now Loading" screen.

C2.PAC contains many assets from WWF SmackDown! 2: Know Your Role, as this game was heavily based from it. As it turns out, there are a few assets that did not exist in that game's C2.PAC: the portraits for the legends that were intended to appear in the game: Andre the Giant, Bob Backlund, Jerry Lawler, and Sgt. Slaughter.

The same file also contains different portraits for Bull Buchanan, Lita, and Val Venis, which appears to be originating from build later from the August SmackDown! 2 prototype. While Buchanan is already on his Right to Censor suit, Lita still wore her red outfit as she did in pre-release screenshots of SmackDown! 2, which is still in the final game as a CAW part.

Interestingly, portraits for Big Show and Ken Shamrock do not exist in this game's C2.PAC; the generic male CAW portraits were used instead, just like in SmackDown! 2, indicating that game's codebase was from that game's build after both were removed from the game.

The extensionless DMY, when read as an .STR video file, reveals itself to be a tutorial video from Evil Zone, also developed by Yuke's. It can also be found in The Pro Wrestling, WWF SmackDown! and WWF SmackDown! 2: Know Your Role.