WWE 2K20 is a particularly infamous entry in 2K's WWE series of games. Development started under longtime WWE game developer Yuke's, only for 2K to fire them partway through and hand development over to Visual Concepts, giving them barely enough time to complete the game.

...Though "complete" is a bit of an exaggeration here. The end result is an obviously-rushed title with missing features compared to prior games and a ton of bugs at launch. In which 2K abandoned the game after version 1.08 due to how broken the game is.

As a result, Visual Concepts had to make a entirely new engine for WWE 2K22 in which took around 2 years to work on the game.

Present in the files is a model of Hulk Hogan wearing his NWO attire. The attire is not accessible in the game so it goes unused. The model is likely to be used in WWE 2K22, as it had an "NWO 4-Life" edition.

A model of "Macho Man" Randy Savage that appears to be a different version of him, sporting a completely different face. 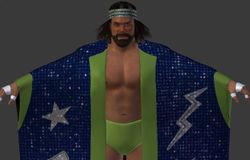 Originally, Nikki Cross was supposed to be in WWE 2K19, but later ended up being removed from the game. Her character model is present in the files of 2K20. 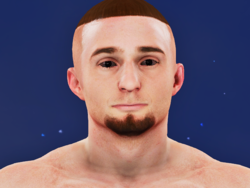 Removing the costume from the MyCareer mode character Ribbie reveals James Ellsworth underneath. Ellsworth was released from WWE in 2018, resulting in him not being a playable wrestler in WWE 2K19.

Some of the masked wrestlers actually had their face scanned into the game.

Kane
Strangely, Kane's face scan retains the bloody red eyes. This is probably due to the fact he had to wear facepaint to hide his face to wear his mask better.